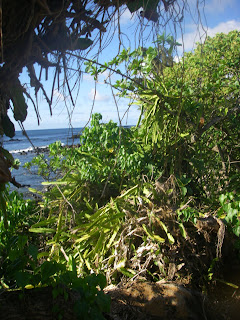 The trail to the beach. 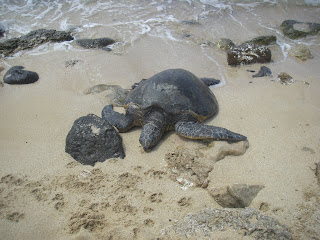 Passed this guy walking down the beach to our spot. 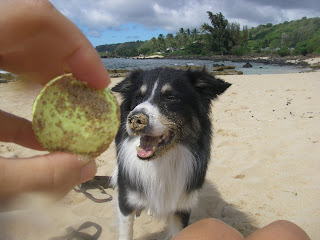 Entertaining the Border Collie while relaxing. 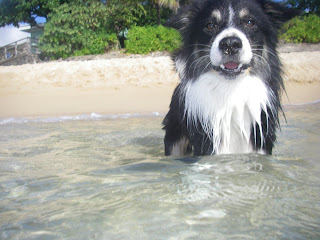 Last swim of the day.

Sunday afternoon was a mother daughter day as daughter started back at the University Monday. We finished the afternoon with a sunset stop at our favorite shrimp truck. No pics from there; we were too busy eating.
Posted by Pseudo at 8:42 AM 2 comments:

What we search for in fiction is not so much reality, but the epiphany of truth.

Looking forward to a few light bulbs flashing over my students heads today as we analyze a novel. Let's keep our fingers crossed.
Posted by Pseudo at 8:15 AM 2 comments:

You are so distracting, but mostly in a good way. When I started a blog I just thought it would be a new, and perhaps inspiring, way to get me writing again. For many years I spent my breaks sending out unsolicited manuscripts. The main purpose for this activity was so that I could have a steaming pile of rejection letters for reading material on my next break. Fun as that was, after nearly ten years I weaned myself from this obsessive ritual, largely because I had no time. I had spread myself parchment paper thin professionally, taking on too many roles and responsibilities. And my children were growing up faster than the arrival of the holidays. Time with my husband (and by time I mean moments when we were not discussing children’s schedules, paying the bills, or work) was becoming so rare that I began to think we’d transacted a business venture instead of a soulful partnership. So when I actually had some time to spare why sit in a room in front of a computer when I could be out in the ocean surfing with my son? Or something EVEN BETTER.

So, except for Standards-Based curriculum and department-wide rubrics (YIPPEE – giddy up on this here pony ride because it is FUN), I stopped writing.
My first inkling back to written reflection started over two years ago when my sister started a blog and I would not only read hers, but scroll her blogroll and read some more. However, l still tended to partake only during my breaks and thought of the cyber world (outside of researching for lessons) as something like a summer beach book.

My first itch came during the year I was diagnosed with breast cancer. The epiphanies and snippets from my thoughts during the months of chemotherapy and radiation treatments are jotted down in notebooks in every room of the house. But, for the most part, I have not gotten back to them.

My first scratch seemed to prove that I had neither the time nor inclination to stick to it. I had 4 posts in the first five months.

But I find myself now looking forward to a full blown rash. Yes, there are several more than a dozen of unfinished pieces in my documents. But instead of making me feel like a total loser for what is not done, I am content. I am excited.

I am spending so much time READING blogs. It is so easy to get distracted for hours.

And to be honest. I’m really getting jealous of how pretty the rest of the blogs are. I spent an hour trying to figure out how to embed a sticker from the breast cancer site. Notice it is not here.

I now have to suck up to my nineteen year old daughter to give me a crash course in customizing my layout.

Thank-you to Laura and Kristan for being the first visitors to leave me a comment! If I knew how to link back to your blogs with a hotlink, I’d do it. But for the rest of the day I need to go grade student papers….
Posted by Pseudo at 5:51 PM 8 comments:

A friend told me to watch this and everytime I get a lump in my gut and misty eyes.

And I really like how a glass of a wine from France does not trigger a migraine.

Awesome.
Posted by Pseudo at 9:20 PM No comments:

Friday, August 29th, I head to a beach house on the North Shore. There I will stay with several of my women friends (most of whom I’ve known for over twenty years) for our annual Laborless Labor Day weekend. We started the tradition two years ago. That first year I was about halfway through radiation treatments and my friends planned a ladies only weekend retreat at a beach house on the North Shore. The instigator told me we had been talking about doing this for too many years and my bout with breast cancer was a wake-up call that we needed to start doing those things that we talk about doing but don’t get around to. Our husbands and kids would just have to get by without us for three days. Those three days were spent hanging out on the lanai, relaxing and reading and yakking, swimming in the ocean, taking long walks on the beach collecting shells, and yes, there was the evening when my awesome women friends put on the pump it up playlist and all the women danced their hearts out in the living room. Margaritas in hand. That first year my bald head and tired ass were laying on the day bed in the living room, surrounded by the hoopla. I drifted off to sleep in the midst of the gaiety.

This year I plan on dancing like crazy. And snorkeling with my shell bag for hours on end. And watching every sunset with a margarita in hand.

And We Are Only Players

I'm reviewing some basics with my 10th grade students before we start this year's first novel. For simile and metaphor they created a simple formed poem and we added it into the beginning of the year intro/bonding stuffola.

I am copper
like a lucky penny
waiting to be found
This student is gifted with artistic talent and her poem's poster was a surreal, abondoned street scene done in all shades of grey charcoal. Except for the penny which gleamed like a speck of hope in the center. Not all my students can draw, but a clever kid collaged his poster and instead of writing out every word of his poem, he created a riddle with pictures. I'm obviously not as clever as he is, and although he presented his poem in class, when I went to grade it 10 hours later I sat there for 15 minutes, trying to decipher the thing, unwilling to admit defeat. I was so pleased with myself when I figured it out that I let our a spontaneous scream of delight that shot my Border Collie from his sleep and straight up towards the ceiling like a rocket.

I like this assignment as it gives me a glimpse of what I'm working with. A peek inside. I find out how many have transitioned into abstract thinking and how many are still trying to pull their feet out of the wet cement.

We moved on to reviewing theme and, as usual, there are many 10th graders who look blankly at me like I'm talking a foreign language. Even though theme was a focus for them in 9th grade. They all read Romeo and Juliet last year. So I try conducting a discussion on theme around Shakespeare's star-crossed lovers. For most of the classes this works, but one of my classes has more than its fair share of the sophmore class clowns. Five boys who feed off each other, usually with either that's what she said, or some version of YOUR MOTHER.

For this class, we leave Shakespeare behind because the class keeps coming up with plot examples.

How about love? What message did Shakespeare have about romantic love? Family love?

hoooooooooooo miss. That was MEAN when he went get with her in her parents house.

Hmm. Moving on. Or should I say backing up. Anyway, I ask the students what Disney movie they remember best from childhood. After a rousing debate they settle on The Lion King. I'm having better luck and a couple students throw out betrayal, finding your courage, power and leadership. But my boys are adding into the mix elephant graveyard, Zazoo, and my favorite, WARTHOG FARTS.

So we back it up a little more and I ask for a volunteer to summarize the plot of The Lion King. Get plot obsession over with. I'm planning on mapping backwards and then showing the students how we can use plot events as details in demonstrating the theme of betrayal in the story.

The leader of the clown pack offers to do a plot summary for the class. He asks me if I want him to come up in the front of the class and I'm all like nah, I think it's fine you share from your seat like everyone else.

So he starts off and within 5 seconds he introduces the hyenas by barking ferociously, follwed by a Mufasa ROARRRRRRRRRRR The kid's on fire. So I stop him. On second thought, DUDE, COME ON DOWN.

He uses the front of the room like a stage and does a Lion King rivival, complete with a narrator's voice and all the character voices. Body language like nobody's business. He had the kids riveted and in stitches. It was like he'd pumped triple expresso straight into their veins and funneled corn syrup down their throats. The class next door was out of their seats and trying to peek into my room. After the class applauded feverously at the end and I thanked him, he winked at me on his way back to his seat.

Like, Don't worry if you get a little boring now and then miss. I've got your back.
Posted by Pseudo at 8:01 AM 2 comments:

For Now, I AM the Job

I'm back to lists. But now I have multiple lists that are categorized.

To think someday I'd yearn for my summer chore "to dos."

I thought of making a personal list, but if surfing or snorkling were put on a list the world would implode. Instead they are vague muscle memories and meditation happy places.
Posted by Pseudo at 8:14 AM No comments: