I Just Want to be a MACHO MAN. Macho, macho man. Come on, put a little wiggle in it before you start reading....

I’m not big on housework. I love the fact that my daughter does the dishes and the dusting. That my kids trade off vacuuming the house and that my son usually will clean the bathrooms. My husband details my car. So I don’t mind doing the laundry (I am also known to cook when it suits me). Throwing the loads in while I straighten up and do my weekend grading. Yeah, I don’t mind it. If I have the time I really don’t mind folding it all either. I try and time it with my Netflix queue. However, the highlight of being a laundry goddess is the perk of making tip money out of the dryer. I probably pull in anywhere from pocket change to a few dollars – occasionally even a fiver. Once some dumb ass left a twenty in his or her pocket. Their loss, my gain. There’s a bit of a thrill each and every time I am pulling clothes out of the dryer and see a nicely washed and dried bit of currency.

Wasn’t I surprised the other day when I noticed what at first looked like paper, but soon became something immediately recognizable. As NOT money. Square foil packet. Serrated edges. When I reached in and grabbed it, there was the familiarity of the circular edge lurking beneath the packaging.

My kids, daughter 19, son, 16 were sitting at the kitchen counter eating. I came out of the laundry room and waved the singular condom package in the air.

Lookie what I just found in the dryer. Which one of you does this belong to?

Daughter raises an eyebrow at son while addressing me.

Yeah. I’ve never had a boyfriend, I haven’t been on a date yet. But I am having sex. With random guys. I meant to tell you.

At least her sarcasm is up to par.

As far as I know, my son hadn’t started dating yet either.

Son, are you seeing girls and we don’t know about it? Did your dad have a talk with you about waiting and not have sex with hoochie girls that give it up to boys they hardly know?

At the risk of damaging you permanently by talking about your parents’ sex lives, I need to tell you that your dad doesn’t need condoms as chemotherapy rendered me post menopausal.

I’m not sure, but I think there was a smirk tugging at the edge of my daughter’s mouth as she tried not to show how much pleasure she was getting from her brother’s predicament.

I tilt my head to the side and narrow my eyes at him.

He looks me dead in the eye and says, that’s my story and I’m sticking with it.

OK. But tonight, when your dad gets home. And I have to ask him who he is having sex that is not his wife, I’ll be sure to tell him it was you that said it HAD to be his.

As I move the next load of laundry from the washer to the dryer, I hear heated whispering.

Upstairs, while I am folding laundry, son walks in.

You know, I left some of my clothes over at X’s house and he was wearing them. He must have left that in the pocket of one of my shorts. I threw everything he's been wearing straight into the laundry. DON’T SAY ANTHING TO HIM NEXT TIME YOU SEE HIM.

My kids think because I work with 150 teenagers for a living I am prone to bossing around and nosing around any old teen that comes my way. That’s not ALWAYS true.

Later, when husband gets home, I tell him the whole story. I thought he’d be a little more upset about son throwing him under the bus, but instead he was laughing his ass off. He calls son in the room.

That your hopeful condom?

Your field of dreams?

Be careful, those things have an expiration date you know.

Did you make sure you got the kiddie start up set?

And I thought I was the one that damaged our kids.

The preceding man story was inspired by two magnificent, manly awards that have come this way from two terrific dads who blog. Goodfather and Captain Dumbass. They have awesome blogs and have appropriately been awarded with many prestigious bloggie bling. It came to their attention that most of these awards tended to be on the girly side. With savvy technie skills, they designed and launched these wonderful badges: 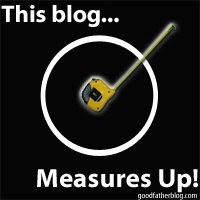 Goodfather's Award
It comes with rules that I did not follow so please forgive me Godfather, oops, I mean Goodfather. Please get the rules from this post of Goodfather's. 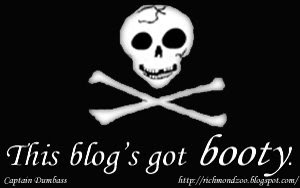 Captain Dumbass
His did not have rules, so it's his fault that I was inspired to make up my own rules for them both. Which was to tell the condom in the dryer story.
I'd like to pass these awards on to anyone who reads this post, everyone I follow (I stalk a lot of you), absolutely all of you that have your blogs fixed so that my follower thingy cannot pick up your feed, and to those in my blogroll. Which is in sorry need of updating and I probably cannot get to that until Christmas break since work is kicking my ass right now.
Posted by Pseudo at 8:07 AM

LOL! Okay first of all, BRILLIANT work on your part getting the best, most lucrative chore. Granted I hate laundry, but maybe that's because all I've ever found in Andy's pockets are kibbles he forgot to give Riley. :( I take dishes instead.

Also, haha, don't you think your husband was right on and it's your son's "hopeful condom"?? Not to get you thinking about things you don't want to think about, but that was my guess... And hey, at least he's being safe, even in his hopes and dreams!

Ahhhh...I can feel the teenage embarrassment from here. And I relish it.

Then he cornered Beloved, and started hissing, "Tell them they're YOURS and why did you leave them laying around like that?"

You know, nothing phases you by the time you get to Number Five.

My husband does the laundry. I hate it.

And I LOVE the booty award. Made me laugh.

That was a great story. I loved it!

24 - ah teens, they really help us get ready for the empty nest.

kristan - dishes are my next not so bad thingy.

jan - that is a GREAT story. Playboy angst.

Hilarious story! And your husband's comments cracked me up. Guys!

I can commiserate with your son because I too had condoms found by my mother in the laundry. It did not go nearly so well for me. Maybe that's why I absolutely despise doing laundry!

I think I actually sprouted a new gray hair reading that post (the mother to two boys writes) - smart kiddos you have there!!

I'm just loving this post on so many levels. But, especially the sarcasm. That was great.

1. My housework skills are about the same as yours. Other half (when he's here) is a domestic god.

2. I needed to read that story today. Thanks.

3. Oh, how I wish I could write and tell the teen Febreeze story. For another time.

Your daughter's comment cracked. me. up. Why couldn't I have been that witty at her age?????

That really narrows it down:) Funny story- nailed,busted-good educational opportunity for Dad!

b- you poor thing. I'm so glad I was saved that particular disgrace from my parents.

eudea- enjoy them while they are little. 16 is till fun, just a lot more grey hairs as you correctly pointed out.

debbie - thank-you. I'm a big fan of sarcasm too. some days it saves the day.

moive - febreeze huh? can only imagine the smells that needed overpowering... hang in there.

Heather - i would have stuttered when and blathered at her age, but she was reaised hanging out with way too many adults, 1st of my friends to have a kid is why. And whoa!! the saucy goddess in here is way cool.

Great story! Congratulations on the great awards...you really do have a great blog!

I read this earlier at work and spent too much time laughing over it to get the comment done before dashing off to my next ap...i used to do the laundry at home for the same reason. And your household...full of razor sharp wit all round, must make for a lively dinner table!

ps...agreeing with who ever else said it...at least he's being safe...

Oh this is so funny. I can see my husband doing the same exact thing to his son, really, and he'd enjoy every minute of it.

THat was great!! (And now I realize that after I live the the girl HELL, I'll be on to boy trouble!!!

I think a spotlight would have been overkill, but the way you got him to confess (kinda) is classic. I will have to remember that when my own kid is of age and I run into this. (I better not.) (Do they still sell chastity belts?)

Is that your hopeful condom? AWESOME! I'm laughing so hard right now. Poor guy. Sounds like he's going to be the butt of a few jokes for awhile.

That was a great story! I just love any opportunity to embarrass my kids and loved hearing about yours.

OMG...I can't stop laughing!!! Of course these things are always super funny when it's someone else's kid. Guess I have alot to look forward to. Sigh.

Congrats on your awards, and OMG, your story had me laughing.

I'm so not ready to find condoms in the laundry. Please dear god not for a looong time.