Of Egrets and New Years 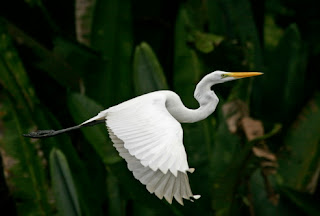 The other day I was driving to work and an egret nearly flew into the right side of my car, veered, passed me, and began a straight path of flight right above my hood and ahead of it by only a few feet. It was like it was leading me somewhere. Or it happened to just be traveling straight down the street I take to work. It did not fly up above the cars, but was literally in front of my car flapping along in traffic.

Then, two days later, nearly the same thing. Only this time the bird flew alongside my car for an entire block.

A week later I was walking BC around the block and as we rounded a corner, an egret was perched on top of a chain link fence we were passing. It had a lizard in its mouth. As I passed him by, I swear he looked at me. Then swallowed the lizard.

Two days later at the park an egret flew down and landed right smack dab in my path. With a lizard in its mouth. Which it proceeded to swallow while I watched, amazed.

I have no idea what it all means.

But my friend Movie started a new blog, of synchronicity and distraction.

And I know she’d like this odd little story.

Happy new blog Movie (do we still call you Movie or is it Sync now?).

2010 was not my favorite. Same with 2009. Still, they had their moments and even the tough stuff has led me here.

But I am ready for a break on the tough stuff.

I’m hoping 2011 will be the start of that better place for all of us.

You deserve a break on the tough stuff, hopefully 2011 brings that to you. Weird with the whole egret lizard thing. Ooh, your dog's name is BC and your daughter is in BC (British Columbia). Not as cool as the bird/lizard thing.

i miss seeing these all the time from when we lived in FL...beautiful birds...wishing you a happy new year!

Happy New Year. Thanks for the shout out.

Love the egret story. I'm sure there's something to it.

Wondering if I can leave comments and link to the real blog, since that link in my above comment is dead...

If I were you, I'd be doing a google search for what egrets are a symbol of...hope it's something wonderful!

that has GOT to mean something... happy new year!!!

How bizarre! And funny, as I was reading it, all I could think of was movie's synchronicity title. And then you shout out to her.
I wouldn't eat any lizards any time soon. Just sayin'. :)

I adore things like that and always attribute some good omen to them. Maybe the birds are accompanying you into the new year?

Now that is weirdly wonderful! To have both swallow a lizard in front of you -dang! Really bizarre!

I googled "what do egrets symbolize" and all this came up:

Better to have egrets, than regrets! Happy New Year Pseudo, may 2011 bring you all good things.

I searched on line and it says egrets symbolize balance.

"This bird offers the gift of balance, allowing you to perform many tasks at the same time, keeping all in balance. People with this power animal are independent and open to change whenever necessary. They often follow non-traditional roles and don’t feel the need to keep up with the Jones’."

Whatever that means. :)
Hang in there. Hopefully the new year will provide much peace and happiness. And balance, if that's what you need. I have high hopes for this year...we can all use more good news and less crap this year I'm thinking.

So, try to have fun and live life with no (r)egrets! (Sorry, that was bad.)

Hey Pseudo, Here's to a happy, peaceful, healthy and EASY 2011. You and your family deserve it.

The bird may be your guardian angel showing you the path is getting brighter this year.

A metaphor of the angel devouring the "dragon" as it were, something to think about.

I know you have had some tough years...I hope that 2011 brings you some peace, hope, love, laughter, fun, and lots of laughter...happy 2011 my friend..I think of you often. XX

I've got nothing to compare to your egret, although Beloved and I were woken by the fire alarm in our hotel this weekend, too. Twice. Tons of fun...

And the whole egret thing would have creeped me right out!!!

Stop by "my place" sometime.

I would interpret a lucky bird with working wings and a healthy appetite to be a good omen, no?

I once had a heron pace me along a road in a very bad rainstorm for several hundred feet. It was very distracting!

I was googling what they symbolize too! Looks like you got a couple good answers! I hope 2011 is a great year for you!

(We are blessed with a massive blue heron in our back pond. Gorgeous creatures. Until they poop. Wow.)

Have pared down my online time drascitally, so only just reading this now. And yes. Movie loves this kind of shit. As do I.

And thanks for the treats. Though I only ate one and let husband have the rest... a goal for 2011 is a smaller arse.

Here's to a better 2011 for both of us! I, coincidentally, had a close encounter with a bald eagle last week. I think it was a good sign!

I'd be a little paranoid of I had a bird following me around but that's just me. Come to thing of it, I have to pint sized people who follow me daily.

I'm hoping for that better year, too. So far smooth sailing with only a few large waves. But they've passed. I know one of your ventures from last year will be in mine this year - the parent thing. But hopfeully, not much more.

I hope that by now you've found these events to be good omens, of some sort. Truly odd the way the egrets all put themselves into your path so many times!

Thanks for the link to Movie; wondered why she hadn't been popping up on my list!

Hope all is well Pseudo! Missing your voice!

Great information, thanks for sharing this. I have been looking for it for a while now and it really helps me out and my website.

Once in a blue moon I think I see one of those beautiful birds in the pond.... scooping up the baby bass.

I love egrets an to have one so near and so strangely often is intriguing. I would take it as a good omen. Perhaps your guardian angel letting you know it is there to help you always.

White indicates angels and is a somewhat "holy" color. I wish only good for you and I think the egret is a good messenger.

i love this story, and wish you well. You are in my heart.

Happy New Year to you, chica! Hope 2011 is a happier time, and that you gear this blog thang back up for some scintillating posts!