Spin Cycle: A Story of Forgiveness I was not raised in a home that modeled forgiveness. Grudge holding, name calling, and judgment were more the norm. Before my parents divorced, during the years leading up to their divorce, many nights were a litany of wrongs and recriminations.

In such an atmosphere, one might be inclined to blame others when something goes to the shit can.

Or to deny, to feign ignorance, to rationalize rightness for a wrong doing.

Because when they weren’t all over each other’s ass, my parents need to criticize, to judge, to condemn, could be focused elsewhere.

And, why admit to fucking up when it only meant a tirade of verbal malevolence? Not just at that time, but ammunition that would be brought up over and over again. Not just when you made a similar mistake, but also, sometimes, just for family fun – which in our home often meant teasing gone wild.

So, no, I did not learn the way of forgiveness from my family.

To understand the degree of my parents’ hostility and unforgiveness of each other, let me mention the following.

For years and years after their divorce, I avoided any and all trigger words which I had learned would lead to either of them going off on a tangent about the other. I knew by heart every story of every misdeed and had also learned (sometimes the hard way) what I might say that would trigger one of these stories.

When I married it was a small wedding in Tahoe and my sisters asked me which of our parents I was planning on inviting. This was 14 years after their divorce and the last time they had seen each other had been in court….

Did I mention that they took each other to court, back and forth and forth and back, until they reached the California Supreme Court about one detail they would not compromise on….and that through this process, every dime and every bit of equity they had acquired in their 22 years together was gobbled up in attorney fees….

So. When my sisters asked me this question I said, “I’m inviting them both.”

“Well, then. They can both fuck off. It’s my wedding and if they cannot be civil, if they cannot realize it is about me and my soon to be hubs and not them, if either of them has a problem with that, then they shouldn’t come at all.”

The never said a word to each other, but they came and did not make a scene.

Over the years, they became more OK with each other.

This still did not stop them from making the occasional verbal jab, of reverting to the old war wounds even decades later.

In 2007 I went to a psychic reading with a group of women friends. It was a circle of eight and I was quiet and observant. The psychic had her eyes closed and went about her business, giving messages to the women in a random order. I was last and figured since I wasn’t saying anything I might not be noticed. I was fearful and wished I hadn't come. I was one year away from cancer and not sure if I wanted to know what lay ahead.

“You, the quiet one, I want you to know you are going to be fine. You have a relative here, and she says she is with you and loves you.”

“She calls herself BeKing…???”

“Bahquine?” What my sisters and I called our paternal grandmother…

“She’s smiling. Yes. Bahquine. Do you have any questions for her?”

“How’s my dad doing up there? Has she seen him?”

“Your Bahquine says not to worry. Your dad is…. In Between. When he died, he had a lot of anger, fear, and unforgiveness, it made it difficult for him. But your loved ones are surrounding him and will continue to until he lets go of his anger and is ready to move on."

That really tripped me out big time.

Last year I went to another psychic reading, a different one, a friend of a friend. I went with a friend. This time I did have a question. It was about moving. Or not moving.

But the psychic was of little help on that one and gave it a shrug.

“Someone is here. It’s your dad and he has a message for you.”

“He says he’s trying to help you and your sisters by helping your mom. He is trying to reach her in her dreams and tell her he’s sorry, to ask her forgiveness and let her know that if she lets go of her anger (at the time my mom was being quite a handful as we moved her towards assisted living) she will be fine.”

At the time, all I could think was, “Good luck with that Dad. Mom sees you coming in her dreams, she will high tail it out of there faster than a rabbit glimpsing a wolf.”

Seeing as how we had uber shit going on with my mom at the time, I never mentioned the psychic’s message to her.

July 4th, 2011. I am talking to my mom (this is huge, she wasn’t talking to any of us for months). But now, she pretends last year never happened. She is happy in her assisted living home. She tells me she has great friends, she sits at the fun table (translation: popular)at meals, goes to movie night every night, and loves just sitting in her apartment and reading by the hour.

I’m happy for her.

I accidentally say something that triggers her into a rant about my evil father and his wayward ways.

I become brave and say to her that I try and stay away from negativity these days, that I forgave my father any and all wrong doings many years ago, and perhaps maybe she should too.

I tell her I would rather talk about something else.

Then she says the strangest thing.

She tells me she has had dreams about my father often the last year. That it “scares the shit out of her.”

She tells me he is reaching out his hand to her, but she never takes hold and turns away instead.

She asks me if I think if she forgives him, will the dreams stop…

I tell her maybe she should take his hand in the dream and see what happens. 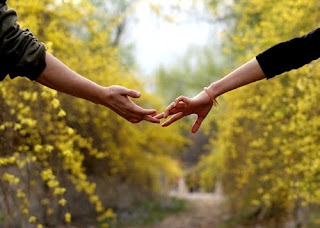 For more forgiveness spins, head on over to Jen at Sprite's Keeper.
Posted by Pseudo at 12:49 PM

ok this is a wicked cool story on the back side...i hope she does...forgiveness is a gist we give to others and ourselves...

(PS: I'm glad things have worked out with your mom and her new home.)

You KNOW that this is my favorite sort of story.

Thank you so much for sharing.

This is an awesome post. It really gives someone a lot to think about!

This made me cry and have hope.

After being gone for so long, I'm so glad to discover that your mother is doing well. I hope for her sake, and your Dad's soul, that she takes his hand.

So good to read your words again, dear Pseudo.

*sigh* Pseudo, what a WONDERFUL post (even if I don't believe in psychics and mysticism). I wish, oh I wish, I could write something this honest about my parents and forgiveness. I can't - it would cause a shitstorm of epic proportions with my sibs - but oh, how I wish I could.

Dammit, I'm crying!
Beautiful post, beautiful words, I'm always the pessimistic one, but, oh, this gives me such hope! I hope your mom takes his hand. I hope forgiveness isn't beyond anyone.
You're linked!

WOW! Pseudo, that is a GREAT family story. I love it.

My friends are going to see John Edward in August, and I'm hoping, hoping, hoping they can finagle another ticket for me. Working on it. I so believe in that stuff.

This is the closest I have come to hearing of a really true psychic. What a story. I so hope your mom can forgive your dad. For her own health as well as the whole family.

Love the ending to that story. Forgiveness is what its about!

this is amazing! so much to think about! and forgiveness? so very freeing. i do hope your mom can make that step.

What a great story to share! I love it, as I've grown up the same way. Because of it, I'm not a very forgiving person and I usually don't forget much, but I also don't carry my anger, so i guess that's good. I just wash my hands of whatever or whoever puts me in such positions.

Wow. She should grab that hand; it will set her free. Remarkable story. Thanks for sharing, Pseudo.
You are free now, too.

I am in awe of your ability to open yourself to psychics. I would be scared and more than a little skeptical. I'm not sure why when I believe a lot of other crazy shit. I, like you, don't want a lot of negativity in my life. It's just not worth it emotionally.

Craziness. What a great post. I'm glad you were able to get out of all that negativity, and that your Mom is doing so much better. Maybe taking your Dad's hand in the next big step for her, huh?

Such a great story!
Oh, I just love this post!

Interesting story. I do believe forgiveness is healing to the one who forgives.

This is incredible. It is so well written and speaks to me and my family in many ways. Like Ash, this gives me hope. Thank you for sharing what has to be a painful story. I have no doubt that it will affect my life starting today.

Wow and more wow! This post is really mind-blowing. I do hope your mother gets to be able to shed her negative baggage.

Pretty cool how the psychics were able to see all of this and give you some perspective for when you did speak to your mom.

Oh wow, that is quite a story! I hope your mom does find some peace through forgiveness before it is too late.

Wow, that is a POWERFUL story! Thanks for sharing. I love the "happy ending" because so many times there isn't one. I also believe that you have learned from this experience and hopefully you are changing it for yourself. When I hear that not asking for and forgiving cost so much money and ended up hurting the kids, that's makes me sad and angry.

I am SO glad that it's working out in her new place, I know how much trouble you've had over the past year. Big sigh of relief for you.

Tell her to grab on.

That is pretty crazy! And awesome.

not only did Mom take Dad all the way to the California Supreme Court, it was due to that decision that if you've been married 10+ years you're entitled to 1/2 of your spouse's retirement in the state of California.

this is beautifully written, sis.

Well damn! That is pretty awesome-- from start to finish, Pseudo. What a great story.

came by way of movie. she knows i love this stuff

I have only one word for this post: WOW!!!

Whoa. This one hit home.

First of all I feel SO SAD that you had to grow up in that environment--esp directed toward you.

My parents divorced and both remarried, but there was still and continues to be much acrimony.

I find your experiences with the psychic, and your Mom's dreams really uplifting.