Kate did a post about going home for Christmas. What are the rituals, the memories, the traditions…

Commenting in her thread got me to thinking. At 51, I’m fairly far removed from the childhood of my past. We moved around a lot. I grew up in the LA area where my dad was a film editor and my mom was a housewife. They couldn’t decide what suburb or lifestyle they were seeking. I think they both had a bit of the grass always being greener somewhere else. In retrospect, I think they were looking for a place where they would be satisfied with their life and marriage and with each other. It never happened, but it meant that I was given a vagabond spirit.


Until I was ten, we lived in the San Fernando Valley. Track homes. Streets that ran perpendicular. A lot like Wonder Years or The Brady Bunch in physicality, not so much in organic realness. My aunt lived within a few blocks and my paternal grandmother lived a few miles away. The Christmases here are the ones I remember with wonder and magic. There was a Santa in Panorama City where they had “reindeer,” and I remember asking over and over why Rudolf’s nose was not the red I had expected. I remember going to get the Christmas tree being a big event and walking with my eyes closed through the rows and taking big deep breaths of the pine smell. I remember going to my grandmother’s and picking up Christmas presents that were wrapped beautifully with homemade bows courtesy of my aunt. On Christmas Eve we would be allowed one present each to open and my little sister and I would shake, rattle, and roll those gifts to try and tweak out one with a toy. There’s not much to do with a dressy blouse for the rest of the night, but sometimes that was just what you got. My dad would make Tom and Jerry’s (we were not a big eggnog family) and we had special cups with Tom and Jerry engraved in gold lettering at a diagonal across the front. I remember my little sister and me scrambling out of bed as soon as my mom left the room and looking out the window hoping to catch a glimpse of Santa and his sleigh. I remember truly believing in magic. 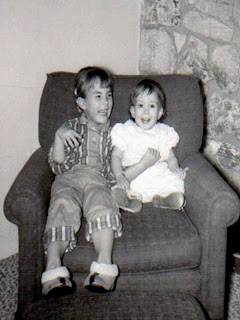 My older sister and I, about 1960
When I was ten, we moved to a mobile home park on the beach. The other day I was talking to my mom on the phone and I actually had to ask her where we put the Christmas tree when we lived there because I did not remember. What I do remember from living there was the disintegration of my parents’ marriage. My mom’s suicide attempts. My older sister leaving home barely 17 years old and living with a friend her senior year of high school.
When the park was imminent domained by the state, we moved to Oxnard. When I was a sophomore we moved to the Conejo Valley. I don’t remember much from these Christmases either.
My parents finally separated at the beginning of my senior year. Their divorce was so bitter and so embattled that they actually appealed it all the way to the California Supreme Court. The following Christmases were only peaceful when I was with my grandmother, usually on Christmas Eve. Christmas day was spent dutifully with my mother who would drink herself into a temper and make biting passive aggressive comments at my sister and me.
When I moved to Hawaii the summer I was 24 years old, I didn’t go home for Christmas. I was working in a restaurant/nightclub and couldn’t get off. I went out to dinner with my friend that I moved here with, then pulled a 10-2 cocktail shift. It was such a relief to not have drama on my Christmas. I have never been back for Christmas since.
Tomorrow. Christmas Present. It’s a happy story. Really.
Posted by Pseudo at 6:43 PM

Families definitely bring out the drama! I think I've found a pretty good balance of being close enough to them to visit if I want, but far enough away for some distance from the drama...looking forward to the happy Christmas present story!

My parents always picked out the gift we got to open on Christmas Eve and it was always something practical like an alarm clock or a flashlight. Like your blog.

Liz - that sounds perfect. Now that my mom is 81, I wish I could drive to see her.

Derfina - welcome and thank-you. A flashlight could be fun to play with on Christmas Eve.

That photo is so adorable. And I think we all have to find the holiday tradition that works for us. We can't really worry about everyone else.

Kudos to you for taking the reins and making Christmas your own. I've been incredibly fortunate and mine has always been so wonderful (at my grandma's too), I am so terribly afraid of what it will become after she's gone...

I'm sorry you had so much stress ..... Families can be good at producing stress, can't they?

I hope this year you have a wonderful, calm, peaceful Hawaiian Christmas.

Thank you for sharing this with us!

great song, great vid and great story...i really like hearing about people's lives, growing up and the things that shaped them...i left home a year after high school to go away for university...so being home at Christmas was usually pleasant...especially if the visit wasn't too long ;) looking forward to the next installment...

forgot to ask..this 'imminent domain' thing...i have friend who lives in pasadena in a fabulous old house, on a dead end street with many other fabulous old houses that are empty, because of some conflict about wanting to pass a major highway right thu their neighbourhood...is that the sort of thing that happens with imminenet domain?...a seizing of lands etc...interesting...

and another good word veri = joyiesse...it's like it knows sometimes isn't it?!...

debbie - thank-you! I think I was a pretty cute 3 year old too.

lilu - grandmas are great aren't they?

24 - yea, families can be stressful. Hawaii is very nonstressful. But years from now my kids will probably tell us all about the stress we caused them.

thistle - my sis sent me that shot just last week. she's scanning and digitizing old photos for us.
and yeah. Imminent domain is where the state comes in and says you have to sell your home to them. probably most often from roads. In our case, they made the cove into a state picnic park. it's weird, because they left the park clubhouse. Where we used to have sleepovers and the adults had their parties. now they use it for lifeguards. I always stop there when I go home. I have pics of my kids on that beach.

I love this. Very real. My kind of story - anything that helps us understand who we are and why is good stuff. Even though there is sadness in it, I can sense that you are grateful for having gone through (some of) it. :-)
Hope your head feels ok!

gotta love family, huh? It's tough when parents get divorced and they make about everything except them. :(
My mother died 10 years ago, and as much of a PITA that she was, I'd love to have another Christmas with her. She was pretty snarky at times, too.

Love the song/vid. Families are something aren't they? For better for worse should be the ceremony at birth:) What on earth is a Tom and Jerry? Anything like a Daiquiri- that's what my grandparents used to make on holidays.

I'm glad to hear that your Christmas presents (pun intended) are better ones.

We just started the Christmas Eve present opening tradition. Since we don't open presents until Christmas day in the late afternoon, this appeases my daughter til then.

And me if truth be told!

movie - you and me both. I like the real stories and i am grateful for everything that got me here. most times. heads better thanks, i think the first headache over the break is my body letting me know it did not like how hard i pushed it at the end of the semester.

kathy- my mom can still be awfully snarky, but i am so lucky she has lived to 81 (she is a 30+ uear breast cancer survivor)and when she comes here for Christmas I try to make it great for her.

starrlife - I LOVE the idea of for better or worse at birth. maybe that's the deal we make when we decide to come down here....

tom and jerry's =
To make the batter: beat egg whites stiff with electric beator. Add sugar gradually. Add cinnamon, nutmeg and vanilla. Add in half of the eggs yolks, and blend until smooth.

In a large mug fill with 1/2 batter, 2 shots of [60% rum and 40% brandy]. Balance with boiling hot water. Stir well and sprinkle with nutmeg.
I'm pretty sure my dad left out the rum and brandy for us kids.

Mama dawg - late afternoon? seriously, LOML is a saint for waiting that long.

It's good that you can remember the good Christmases with such clarity, while the bad ones are a blur. And you were so lucky to have your dear grandmother as backstop to some of the less peaceful Christmases.

Maybe we need to go through these kinds of experience, if only to make sure our kids never have to ...

Btw, word veri is giving you permission to go nuts on the Christmas goodies ... "bulkybe"

Tessa - i love the word very. i think i will be bulky for Christmas.

A little sad but very beautiful, which makes it something good. Your post about moving to the trailer park is one of my all time favorite posts of anyone anywhere.

Just think of how different Christmas is for your kids.

they kept the tree between the dining room table and the t.v. against the wall at surf and sand. i have a pic of me in front of it, (but) i might not send it because it could end up on the internet. :-)

We always got one present on Xmas eve too and I remember hoping it was something good (not a book or clothes or anything boring). Now we only buy for the kids and don't get presents at all, the magic is gone!

Sorry your Xmases were filled with drama, hopefully in your adult life you've gotten to enjoy them more.

Thank you for sharing this. I really love reading about people and where they have come from. The more I read of your past I am coming to realize that roads you have walked have shaped you into the beautiful woman that you are...whether it be the good mother, teacher or friend. I, myself, don't have any good memories of Chrismas's growing up...mine are mostly of drama, chaos, angry outbursts, lots of drunk obnoxious people(relatives), and the fact that we didn't get much for gifts because of lack of money doesn't leave me with bad memories as much as the spirit in which these gifts were given.

I have worked hard to give my children different and good memories of Christmas and life in general. But, it hasn't always been easy because to be honest I was learning on my own and starting from scratch. Thankfully my older children talk of happy memories of their Christmas's as children, even though we didn't have much. In fact, they don't remember ever thinking we were "poor" or that we didn't "have". They remember all the fun things we did together.

I am so glad that Christmas present is much happier and drama free! Merry Christmas my friend.

just b- a little sad is often beautiful, don't you think?

smiles - as always, you are such a lovely soul and thank-you for the kind words.