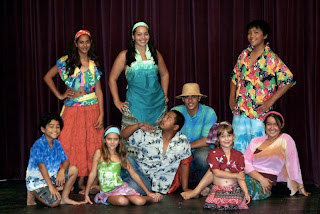 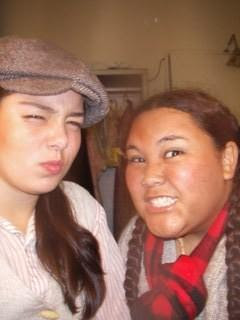 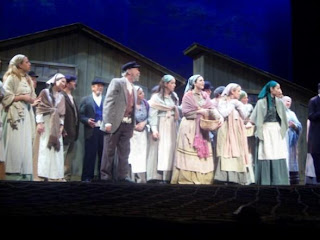 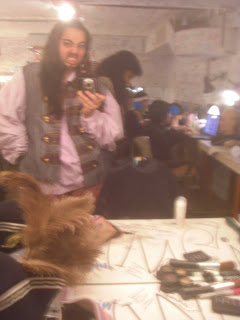 Is your daughter the girl w/ the hat on the left? What a cool looking group. I wish my son would do theatre. It can be such a safe haven in school.

Great pictures and your daughter looks like she is having a great time doing something she loves!

Movie - Yes. She is the one on the left. and you're right,it is a very safe place to be, emotionally and physically. Theatre kids are so nice and so supportive of each other. I tried very hard to et my son involved, even had im volunteer as a techie one play. But he'll none of it.

Smiles - you're dead on. she has a great time and she loves it.

My son (17) is totally involved in his high school's drama department.

So awesome that your daughter is doing this!

HAHA I love the backstage pics! You can just see so clearly how much they're enjoying it.

What a great way to spend her young time! Love the aloha wear and the backstage antics.

How did she get started in theater? Always thinking of ways to steer those girls of mine in the right direction.

What the hell is that fluffy thing?

GF - I bet your son and my daughter have a lot in common. Music, theatre.

kristan - she has folders full of backstage antics in our computer.

b- the aloah weat is from the show Once on This Island. She started in theatre very young, she read an audition call for To Kill a Mockingbird in the paper when she was just 7 and it greew from there.

Stoneskin! Hi there. the fluffy thing is a big plume of a feather from one of the pirate's hats. She is a pirate in Peter Pan, showing this month at Diamond Head Theatre. Hence her beard.

These are terrific pics! I love seeing kids involved in school extra-curriculars.

Mama- me too. theatre has kept her busy, happy, and out of trouble.

I had to go back and read the sequel. Wordless Wednesdays kill me. I always want the full story. I'm so glad you filled in the blanks and I think the arts are such a great opportunity for people to discover themselves.

Such good pictures. You can't look at them and not smile.

I love the theater. I have great memories of my time acting. Great photos!!!

:) thanks for all the nice comments! i do love it! some backround of the pictures: the first picture is from once on this island which is actually in the caribbean... we had to use trinidadian and tabago accents. the second picture is from annie right before the hobo scene.
the third picture is from fiddler on the roof during the gossip scene, probably one of the funnier parts. and the last one, i just did a performance of that show! and thats peter pan! it's so much fun!

BTW - you have a shout out today for Friday's Food for Thought. It's putrid baby! (that means "cool" right?)

Tricia - the arts rock and the kids flock to them.

debbie - me too, smile every time.

Rhea - maybe someday you'll post those pics of yourself.

Eudea- putrid is my word of the week two.