I almost passed on this week’s spin cycle topic – adventure. Usually when I’ve got nothin’, I let it sit. Within a day or two the story, the slant, the spin, will come. Most of the time I get my ideas while I’m out walking.

I suppose one of the most adventurous things I ever did was up and move to Hawaii. Most people who read this blog probably assume I moved here to attend college. But it is not that simple. I was twenty-four when I moved here and had not attended college for several years. After three years of higher education and an epiphany that my major was not for me, I had taken a break. I was working in a restaurant in LA and a friend at work and I thought as long as we were in stall mode we might as well wait tables someplace more adventurous. We were thinking of moving to Colorado and skiing a winter or moving to Hawaii and beaching it for a year. What can I say? It was June and once we made the decision to leave, we did not have the patience to wait for snow. Hawaii it was.

My friend moved back after six months. Believe it or not, Hawaii is not for everybody. I stayed and ended up working at a place that changed my life – Bobby McGee’s. Several of the friends I made while working there are my closest friends today, 27 years later. One of my two roommates from that time was attending college and influenced my return. I started back part time, but within a year was in the full swing of it.

I double majored in Political Science and English and had hopes of graduate school and worldly travels. During my last year of college I was making plans to live in Japan after graduation when I started dating my husband (who had taken a job at, you guessed it, Bobby’s). When I first agreed to this thing called marriage and family, I did not foresee how much it would change my path.

Now my life’s adventure turns out to be the choice to have a family. Sometimes I wonder if, by the time we get them through college, there will be enough piss and vinegar left in my husband and me (and mula left in the bank)to travel and adventure like we thought we would back in the day.

Who knew the seemingly routine adventures of a mortgage and raising children were where I was headed. Certainly not me. For me, this adventure called family was not a place I proceeded to purposely; nonetheless, an adventure it has been. One I would not trade for all the travels I had hoped for.

Having a second child, buying a home, and taking in my husband’s 80+ year old grandmother all within a year? An insane adventure.

Juggling my son’s sports schedules with my daughter’s performing arts passion for many years? A roller coaster adventure. 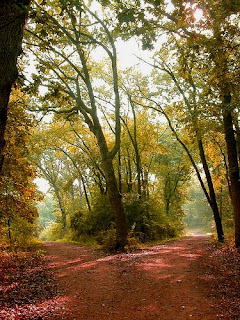 The Road Not Taken

Two roads diverged in a yellow wood,
And sorry I could not travel both
And be one traveler, long I stood
And looked down one as far as I could
To where it bent in the undergrowth

Then took the other, as just as fair,
And having perhaps the better claim,
Because it was grassy and wanted wear;
Though as for that the passing there
Had worn them really about the same,

And both that morning equally lay
In leaves no step had trodden black.
Oh, I kept the first for another day!
Yet knowing how way leads on to way,
I doubted if I should ever come back,

I shall be telling this with a sigh
Somewhere ages and ages hence:
Two roads diverged in a wood, and I
I took the one less traveled by,
And that has made all the difference.
~Robert Frost

Searching for balance amid the many roles of mother, wife, educator, friend, sister, daughter, and somewhere, somehow a creative self? My current adventure.

For more spins, head on over to our wonderful host of the weekly spin, Sprite's Keeper.
Posted by Pseudo at 7:42 AM

Starting a new life in a new place is always an adventure! Thanks for sharing yours with us!

Thanks for sharing your story. What an adventure it is!

I love that poem.

One of the reasons I don't want to have another kid is because when mine turns 18 (9 years!) and is off on her own, I get to start my life anew. I'll trade the adventure of child rearing for an adventure that's all about me.

And I can't wait. Well, yes I can. But you know what I mean.

That was such an awesome story it gave me goosebumps! Good for you for not being afraid...or being afriad and doing it anyway! : )

Great post! And great photo too, is that Hawaii?

When I read this, I can't help but think of George Baily, who kept wanting to go off on big adventures but kept having to stay home to take care of his family, but ended up learning that he had a wonderful life anyway. But I hope you do get to have your travel adventures in the future!

And child rearing? The self-sacrifice subtext is in very fine print until you are knee deep.

One of the greatest joys in life is the fact we don't know what lies ahead! It is ALWAYS an adventure, isn't it?

Isn't it amazing how resilient we are? Looking back I can't believe the things that I have been able to not only handle, but accomplish as well. There are days, I don't think I can put my makeup on, but I can raise a dozen kids, go through a divorce, get remarried, pack up and leave my life behind and start over in California....I could go on and on. So why do we think we can't handle the day to day. WE ARE BAD ASS CHICKS!

Thanks for reminding me!

the path not taken has always fired my imagination, there's so many stories there (another great post).

It would be a wild adventure to pick up and move like that. I admire your bravery.

1. I've always loved that poem.
2. Fab. photo too
3. Life is an adventure, no matter how you slice it.
4. You have mula in the bank? How can that be?
5. I can't wait til the damn kids are out on their own so other half and I can take off.

Hi,
I'm Alexis from Knot Sew Crafty and I have a package to send to you for Sherri's Spring Swap. Will you e-mail me at tsubasany@mac.com with your mailing address?

I love your blog, by the way. I've been lurking for a long time!

Although most photos on this site are mine, this one came searching google images for a forked path.

Oh, how familiar I am with that different road. No clue back then where it might lead. But then, that is the adventure. Sounds like your spirit hasn't left you in spite of the kids and mortgage. I've heard these experiences just make the next day all that more interesting. I so hope.

You're right of course - sometimes the best adventures are the every day ones.

Kudos to you for up and moving to Hawaii! That is so brave AND adventurous!

Thanks for the awesome spin!

I love your spin and how similar it is to mine. You are an incredible woman that has made great sacrafices in her life. I too hope my hubby and I aren't too worn out when our present adventure ends, so that we can go out and live some of our dreams.

Sounds like your adventure of choice was exactly the right one for you... great post as always!

Ps. that is one of my favourite poems.

Who knows where you'll be at the next bend in the road? I never expected as a college student to be where I am now, and I wouldn't trade it. But I'm also looking forward to what's ahead.
Great post, Pseudo.

I love your explanation that family is an adventure (amen, sister). And I have that Robert Frost poem hanging in my office. One of my favorites!

One of my favorite poems - and your post is so exactly right. Having a family is an adventure.

And i did think that you moved there to go to school...but the comment about being impatient to wait for snow ebing the deciding factor is rich. Oh the whimsy and impatience of youth and how it has affected our life decisions and the path we take.

Awesome spin. I never thought life would take me down the road of parenthood either, so it has taken me by surprise. But boy has it been a great adventure. I wouldn't trade it for anything.

Still, there are some other adventures I'd love to have too...going to Ireland, Hawaii even. Traveling a little more.

Here's to hoping you and your husband have enough money and piss and vinegar to travel some more too~!

Congrats on being the featured on SITS today!

Thanks for sharing your story! I had to memorize the poem in high school and then wrote a speech on it in college. Def. a great one! Thanks again! :)

As always, your words speak to me on such a deep and basic level. Balance is something that alludes me and something I strive for, yearn for, can't find and require in my life. When you find it, let me know.

I'm coming over from SITS. What a nice post you've written here. I enjoyed reading about you, and the addition of the Frost poem at the end was a thoughtful touch.

great post; always loved that poem too; family life is such an adventure no one can explain to you til you embark on that journey, huh? and if they did, you wouldn't believe them. I, like you, wouldn't trade it for all the travels I'd hope for either.

Congratulations on being picked blogger of the day.. Well deserved.. Your writings are so interesting.. I am now a follower so I will return..
Thanks for a most pleasant visit..
xoxo
((((hugs))))
Maggie
waving from couthern ontario, Canadas

I did something similar when I transplanted myself to Sonoma County from Missouri. My adventure didn't last long, however. I'm really proud (and kind of jealous) of you for sticking it out!

I think "Up and moving to Hawaii" would be amazing.

Robert Frost is one of the only poets whose work I can stomach---I'm so glad you added that poem to this post. It fits perfectly!

Love that Frost poem. What an adventure indeed! It's crazy where life will lead you and how you can always manage to land on your feet. I'm glad you found happiness in Hawaii, even though it wasn't the plan you had envisioned.

Now where were you the 12 years I waitressed?! (i.e.-why didn't I think of moving to Hawaii?! LOL!) I loved learning more about your journey-great spin!

I think your adventure is still unfolding :) And I've never been one to take the road more traveled. I have that book somewhere. I might have to bring it out again... :)