New Year’s is special here in Hawaii. If any of you ever want to get out of the cold one winter break, come on over here and spend New Year’s Eve in Waikiki. If you are also after tropical paradise in a more isolated and Bali Hai type setting, just book Waikiki for New Year’s and head to the outer islands or the North Shore of Oahu for the rest of your trip.

I had no idea what went on the first New Year’s Eve I lived here. I was working my way through college as a cocktail waitress at Bobby McGee’s and was in a nightclub the whole night. However, the following year I was off and went to a party with a guy I was dating. New Year’s Eve parties over here are family affairs. They are giant potlucks. Board games are played at card tables. Children and teens and adults who like things that go boom are thrilled with the fun of setting off skyrockets, fountains, spinners and sparklers. Women from several generations tend to hang at the tables, organizing games and chatting for hours. Dads, Uncles, and grandfathers watch over the fireworks tables set up in garages and make sure that the children and teens don’t bring matches or lit punks into the area. Children set off fountains of fun for hours.

The evening is centered around fireworks. Firecrackers. Sparklers.

Have been told it is the Asian influence in Hawaii. The noise and flash has something to do with clearing out the past and making way for good fortune in the year to come.

The island looks like Main Street at Disneyland from about an hour before dark (think anxious teens who sneak one or two off when no one is looking) until well past midnight. 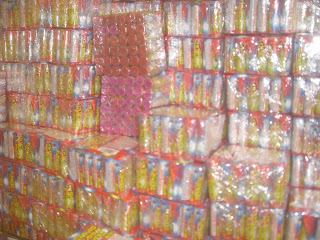 Fireworks are legal and sold EVERYWHERE. From fireworks stands set up in parking lots to each and every grocery store on the island. Firecrackers of a certain disciple need a permit, which is fairly easy to obtain. 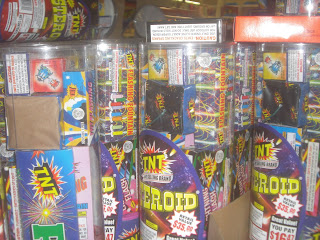 “Illegals.” Those professional only fireworks shot from a cannon like cylinder up into the sky. Yeah, black-marketed like crazy and it seems someone on every block is privy to how to get them. 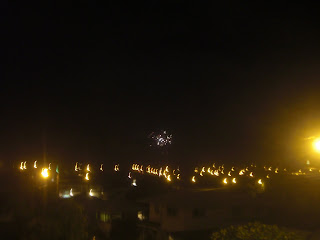 I leave my house with my potluck dish around sunset, and as I drive across the island to my friend’s party, my kids (now 20 and 17) shout with excitement as blasts of color bursts go off left and right and ahead and behind as we drive.

My friend lives on a hill overlooking Waikiki, Kaimuki, and Kahala. She has a deck set up with tables and chairs and a buffet of yummies to last the night.

Her carport has a ping pong table for the teens. Along the side everyone leaves a contribution to the fireworks fun.

The kids this year range in age from 12 to 19. There are ten of them. The house next door has another six teens and four kids around ten. Eventually the two groups hook up and share ideas for fireworks adventures.

The home I went to for years (their kids are 23 and 20 and off the island so they stopped hosting the party), well at this house, the dad challenged his son and his sons’ friends with building a house that would not blow up. The boys and the dad would spend the day constructing buildings that looked like doll houses. They would put these houses on a table set in the street and drop firecrackers into them all evening until the houses disintegrated one by one. The last house standing would win. The dad is an engineer and he always won.

Every house hosting a party saves their best fireworks and a “25,000” string of firecrackers until the big show stopper at midnight. The homes with the illegal aerials and skyrockets save enough for a grand finale. This year, it was like a competition to see who could put on the best show.

While the adults stood in the yard admiring the skyrocket extravaganza, the teens had put together a roller coaster of firecrackers down the street, complete with fountains and spinners. 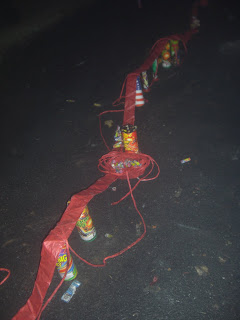 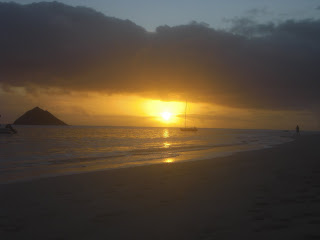 A good time was had by all.

If you book a vacation during New Year’s, get a room with a balcony facing mauka (mountain). Town is where the real show is this night.

Driving home, back across the island, it is like patches of fog. The smoke from the firecrackers is that thick. This is not a vacation for someone with asthma.

Oh. And the crowd young enough to go a night without sleep? They watch the sunrise on the first day of the new year from the east side of the island. Daughter and friends went to Lanikai. 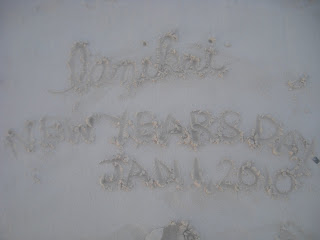 This post is linked with Sundays in My City. Head on over for more unique photo tours.

Oh, it sounds SO delightful! You should link this to Unknown Mami's Sunday in my City! Everyone would love your pictures. I am ready to visit Hawaii right now : ). My son LOVES fireworks. He can't get enough! :)

Wow, what a special celebration! Sounds like a bigger deal than Times Square in NYC, even. (I've been there. I always wanted to do New Year's Eve there, so I'm glad I did it, but it was definitely rough. LOTS of standing in the cold with nothing to do.)

Very cool fireworks vids! I really wish that I had the money and the time to go to Hawaii. It would be an awesome experience, especially since I actually know someone there!

Wow, that's so different from ice sculpture competitions, which is something that happens in our neck of the woods.
I don't think I could be that close to fireworks. But I like looking at them from afar.
Awesome post, Pseudo. xo

Wow, NYE on Waikiki. I've just added that to my bucket list.

Fireworks are pretty common here too, although it makes my dogs pretty squirrely. Sounds like a lovely way to ring in the New Year...or any other day of the year really. Someday.

Oh I want to come some time..

How fun is TAHT!!!! Thanks for the tip of the Mountain View rooms! I'll keep it in ind if I ever get their for the holidays!

Thanks for the tip on booking the room. I hope one day I will be able to use it :-)

Love your post! It's currently about 9 degrees (actual temp) here in St. Louis and the idea of warmth and sunshine makes me want to hop on a plane!

Sounds like most fun. We attended a concert with kids this year. Robert Earl Keen and the Randy Rogers band. Other than the fact that I can't hear and I'm just beginning to feel my feet again (had to stand the entire time) we had a blast.

Happy New Year to you Pseudo! No more years like last year.

What fun! The fireworks remind me of growing up in Texas - you could buy legal fireworks on the side of the road. I remember building those firecracker rollercoaster/chain reaction things all the time.

I want to go to Hawaii!

wonderful vids! sounds like a lot of fun! on of these days i will make it to th islands...

This sounds like the best New Year's Eve party any where! I like the idea of having potlucks with the whole family involved. And, of course, I'm a sucker for fireworks and sparklers!

You should work for the tourism authority. You do more to convince me that I need to visit Hawaii than anything else I've ever read.

Man, that sounds like so much fun!
My New Years was boring and a little lonely.
Those fireworks sound incredible.

I like to look at fireworks, but the noise makes me mental. Since it's usually raining here on New Year's Eve, what usually ends up happening is my neighbors run outside at midnight, set off a few firecrackers, and then run back inside to towel off. It's never as spectacular as they envision.

A beautiful way to ring in the New Year, I'm glad it was a happy one!

What a great way to bring in the New Year!

I really enjoyed this! My husband was born and raised in Oahu (Mililani) and is always telling me about New Years there. I got very excited to share your post with him.

That is the first time I have ever heard anything about why we do fireworks, interesting.

What a fantastic way to ring in the new year! I loved reading your post and the pictures were so wonderful! Have a great week!

I think I could adapt! Sounds wonderful! :)

New Year's Eve is not so rowdy on Kauai, which is the only island I've been to on New Year's Eve. However, we have attended bitchin' parties, thrown by the owners of the B&B we stay at while we're there.

The photo with the, um, pyramid? is fantastic. Sounds like a whale of the time. Hope the whale wasn't hit by any fireworks.

Oh, how I would LOVE to spend New Year's Eve somewhere warm!

That was quite a fireworks display!

Thanks for sharing this with us!

Happy New Year to you. What an amazing way to spend New Years Eve. I can only imagine if the authorities here in L.A, saw all those fireworks. They would go crazy what with all the fires. You're barely allowed to own a match in this county

Sounds lovely. We spent a much more quite evening after taking D1 out for her birthday dinner.

That sounds like so much fun! I love hearing about your traditions.

What a great way to bring the New Year in!

I got a photo from a friend this year who had hopped a flight from Minneapolis to Hawaii for Christmas. Sooo jealous!

i absolutely need to come and spend a birthday over there. How exciting...New Year's Eve here no longer seems to be the big deal it was when were kids. Pretty much everyone stays home. Period.

Perhaps because most of our celebrations were aclohol fueled back then and it is no longer considered PC to drink and drive. Apparently we need to take party plannning tips from your part of the world. Oh wait..fireworks are completely illegal here too. God we're boring :))

That sounds like soo much fun!! Plus, those fireworks are amazing!

They are all illegal here. Doesn't seem to stop people from shooting them off though! We were at my brothers and people were shooting guns off too at midnight. You'd think people would have learned not to do that anymore!

Wow, Pseudo, it sounds like fun there for NYE! I'm looking forward to the days when my kids are old enough to stay up and enjoy the fireworks. We gave them (highly supervised) sparklers this year and they loved them.

Love your New Year's traditions there. The best New Year's I attended was in Springfield, Illinois in 1996. It was cold and foggy, but they have swing bands in the capital, historic contradances in the historic capital, banks sponsoring more bands or a vignette, or a poetry reading, places to pick up food. At midnight, against the foggy cold sky, they set off fire works, which were gorgeous set off by that gray haze.