The Spin Cycle this week is LOVE.

Living with people you love isn’t always easy. But just when you wonder if it’s all worth it and maybe your life would be simpler and more peaceful if you did a nonalcoholic version of Kerouac and took off with that backpack and headed, say, to a train (and no, Captain, we do not have trains over here I’d have to take a plane first, which does change the whole running away mysticism). What was I saying? Oh yeah. Just when you wonder if all the anxiety and stress is something you can live with FOREVER, it stops. And you feel the love come pouring in, like a calm blanket, and it wraps you up and you know you would lie down in front of that train instead of getting on it if you needed to in order to make your loved ones life better somehow. And I guess that’s what we do metaphorically every time we stick around when it’s not pretty.

I woke up from a dream this morning. My dreams can get fairly bizarre, but this one was so simple, it was like dream interpretation for intuitive idiots. In my dream I was at the movies with my daughter. I was watching the movie, but I was holding a white teddy bear with a red ribbon tied around its neck. We were sitting in the side aisle. Along through the middle aisle, I feel before I see someone approaching. It’s my husband, and he’s making his way over to us. And guess what is in his arms? A bigger-than-mine, white teddy bear and a big cello wrapped bunch of long stemmed red roses. My daughter elbows me and we move down a seat and make room for the hubs. Without saying a word, we both acknowledge we are not angry any more, and shake our heads at the matching make up gifts.

I know it sounds as corny as a carnival dog, but that’s the dream. Very clichéd, yes. But in reality, we have NEVER given each other stuffed animals, so I guess my psyche was telling me we are both a couple of toddlers when it comes to holding a grudge and staying pissy.

So I wake up from this dream and it’s, of course, 3:30 AM (because that is the usual insomniac moment of waking and not being able to go back to sleep for me) and I look over at my sleeping husband and it is like watching a terrible two year old. Remember those days? The wild child by day looks like an angel when sleeping? I see the peacefulness of his sleep rimmed with the worry of work being slow and bills not paid. Instead of wanting to hit him over the head with a blue pillar, I want to lay my hand over his forehead and somehow absorb the anxiety that haunts him.

I go into my son’s room and there is my 6’1” gangly sixteen year old sprawled as only a teenager can when knocked out for the night. He looks totally konked, but as I brush the hair off of his forehead, he smiles in his sleep, opens one eye, and mutters as he falls back to sleep, “love you mom.”

My heart melts and is refueled at the same time. 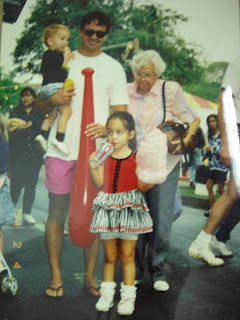 Punahou Carnival 1994. How's this for a Valentine's photo? The boy is a sweet 19 month old in the arms of his father. Grandma was still with us. She raised my husband and we made a home for her after we bought our house. Daughter is a precious 4 and a half year old looking like a poster girl for cotten candy. The giant balloon baseball bat is a bit of a scary foreshadowing of the bam bam nature of my men, but we are letting that go...

I don't remember my husband having pink shorts...I don't think he'd be able to pull that off these days, not quite sure if he pulled it off then...just saying.

Happy Valentine's week. For more love spins, head on over to Sprite's Keeper.

I can't relate to the hubby feeling, but I know what you're talking about when you mention watching a sleeping child. That's when I'm the most IN LOVE with my child. I can watch her sleep for hours.

The night time scenes sound lovely, even if I'm sure you'd prefer they not take place at 3:30 AM... :P

Family sucks sometimes, but at the end of the day, they're everything.

I can SO relate...I got all shivery with deja vu and you said it so much better than I ever could.

Naw cute post. Of course it is possible that you have misinterpreted your psyche and it just wants more bears...

I really like this post, thanks for the reminder that love is always there even when the going gets rough-and-tumble.

Hmmm. Perhaps I should have asked others to interpret my dream.

Maybe my psyche was telling me both hubs and I are turning into a couple of grouchy old bears as we get older. We need to be more the cuddly kind...

Lovely post Pseudo. You too with the 3.30am? Sucks doesn't it. Here's to sleeping angels x

3:30 a.m. is the magic hour.
Love this post. Love it. My grouchy child looks like an angel when he's sleeping, of course.
Thanks for the heads up, Pseudo.

What?
You dream in colour?
Must be a Hawaii thing.
I dream in black and snow, er white.

Maybe your dream means you are supposed to go buy a teddy bear this year???

Loved this... and Hubs totally rocked those pink shorts.

That was awesome and inspiring. I need to write a love post!

Oh, I love this Spin! I was so angry at John last night (for mostly things he wasn't even aware of) and when I woke up this morning, he was still sleeping and looked so peaceful and so much like the man I had married and it took the edge off my anger so I wouldn't punch him and wake him.
You're linked!

I loved this post! Thank you for sharing. Sleeping kids, sleeping husbands, sleeping dogs, I love them all. My heart melted with yours when teenager opened one eye and told you he loved you.....I got teary!

We did a huge family history project last year and my kids' favorite thing was a photo of their dad in pink swim trunks. Short ones, too. Gotta love it.

Those shorts are fantabulous, especially with the Ray Bans! Love it.

"And I guess that's what we do metaphorically every time we stick around when it’s not pretty." Love these words because they are so true and describe it so well.

I love your spin on love! Hugs!

Happy to hear the storms have abated...and a really lovely post! And you have made me really regret not having children now. Teenagers are sweet when they can still say they love their mom.

glad life is getting better....

and about the pink shorts-- nah never mind

Love the picture of your family!

I love to watch John sleep. He looks so calm and peaceful, all the lines gone from his face. I've caught him watching me sleep too. :)

I love that picture of my daughter. It wasn't until I posted it in the context of family that I took into account the pink shorts. And as Lilu points out, the Ray Bans. Thankfully, I was behind the camera. I might have something equally outdated going on that we have no evidence of.

Love everything about this post. Love that others recognize the angst in life. Love your descriptions of your sleeping men. And I love the photo full of memories.

What a wonderful dream to wake up from, laying beside the one you were dreaming of. Couldn't ignore that dream could you?

Just when we think our teens believe that we're the enemy, they do something like your son that just takes your breath away.

And any guy who would willingly wear pink shorts and consent to be photographed is pretty cool in my book.

Isn't it funny after all the angst, all the pulling out of hair, the smoke clears and all you have left is the love. This was a great post, Pseudo.

Aww, your sweet "little" boy - does the heart good.

Great post. I'll remember it tonight when I want to smack my snoring Hubs - kiddin, sort of.

The post radiates love! You're a happy woman even at 3:30 AM

I am Harriet said...

What a heart warming post. In the quietest moments, love speaks the loudest.

I swear, my hubby had those EXACT same shorts, ha!

If your son is still single in 20 years, I want him to take out my daughter. He sounds like a great kid

I was just getting ready to post a frustrated-at-my-husband thing, but now...

It is so true the good we want to give each other gets mutated by stress and stubbornness.

Thanks for the lovely reminder. I love the picture!!

he you...I luv the pink shorts with the flip flops.

For a giggle come and stop by and enter my Valentine's Day contest.

I love your make up dream! The carnival picture is classic. I think I had that same skirt/shorts ensemble that your daughter is wearing.... and the pink shorts are to die for!

I love watching my children sleep...and both of them are older than yours! So peaceful, so innocent, so right.

Awesome post! I love walking around the house, checking on everyone at 3 am. (Except for the whole not sleeping thing!)

Wishing you a Valentine's Day filled with love.

That is such a sweet moment from your son, I'm sure if he reads your blog, he has said to you,"Aw, Mom why did you have to put that." Tell your hubby that they are great pink shorts, haha.

This is the first time someone's blog entry has made my eyes water. I officially hate you for making me feel mushy and I hate you more for painting such a beautiful freakin' picture of "forever" when I am so damn confused about it... Grrr!!

And i can't even go to the beach today cause I have so much work.

Boo for you and your beautiful entry showing the meaning of true love and commitment to family and loved ones, and for your adorable little girl with her old school socks and for your trooper grandma chilling at the carnival with the young stud who's too cool to care what color his short shorts are.

Boo Boo for it all.

This is the best kind of post-beautiful and clever and funny. I particularly love the lines, "I guess that’s what we do metaphorically every time we stick around when it’s not pretty." and "it was like dream interpretation for intuitive idiots." Happy Valentine's Day! <3