Gangstas and Rockers: AKA Random Tuesday

Part of my bad day last Friday had to do with a few poor choices 17 year old Son had made. That evening I was car pooling to book club with a friend and neighbor. She has a son the same age as mine; our boys went to elementary school together. When I told her about my stress, she proceeded to tell me how her boys (she also has a 19 year old) had been stressing her out too. She went on an eight day vacation to the Mainland this summer, leaving her two boys to care for the house, and they got in a fight. A cupboard was broken and an entire wall had ants on it from one son throwing a full fountain root beer at the other’s head. The boys had also fought over who should clean it up. The dried on root beer and ant fiesta was waiting for her when she got home.

I am a horrible person because this story actually cheered me up and I laughed until tears were rolling down my face.

First day of school last week I had a boy come to class 30 minutes late because he went to the wrong lunch. He was wearing a T-shirt that had a very realistic, life-size picture of the back of a gangsta with a red gang scarf tied around his head and both arms up giving middle finger. MOB in graffiti style letters crossed the middle of his chest. And in case we did not get it, underneath it said

Money
Over
Bitches
Someone forgot to tell the kid the old saying, “You never get a second chance to make a first impression.”

Saturday night my husband took me on a lovely date. A fundraiser that wasn’t cheap, but he felt obliged to buy tickets from his very good friend. For $65 each, we were able to hit a wine bar, then go from food booth to food booth and get little mini plates from Oahu’s top restaurants.

While eating, we sat at tables outdoors draped in white tablecloths and under big white tents. Jazz music was playing. It was delightful and I made sure I tried every single booth’s offerings.

We were on our way home at 9:30 and all I could l think was how full I was and how much I was looking forward to PJ’s and wallowing in my fancy food induced bliss.

Hubs begged me to stop at a club that was having a concert with two cover bands. Buddhist Priest and Fan Halen. Apparently Van Halen was not only one of his favorite bands in his younger days, he had also seen the original band in concert and the memory is a dear one.

Despite my disinclination, he wanted to go so much I gave in and we finished lovely date night with a surreal trip into the 80’s, surrounded by aging rockers. Hubs was very excited that the crowd looked “our age” and not the usual 20-somethings that frequent this venue. However, not all of our contemporaries were representing as well as I would have liked. 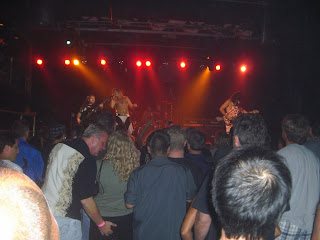 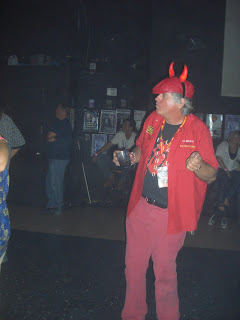 The devil horns had blinking red lights inside of them.

For more Random Tuesdays, head on over to The Unmom.

When Hubs and I went to Florida for 8 days in February, 17-year-old-Boy decided to skip school all week, and stay up every night until 4 a.m. What a weiner.

It always makes me feel better when someone else's kid is worse than mine. But, I think my son wears his misdeeds like a badge.

You are NOT a horrible person - that made me howl too! And she's some kind of parent - she went thousands of miles away and left two teenage boys alone for 8 whole days and the only thing she can say is they broke a cabinet and ants are partying on dried root beer?

Oh, I love this.
And I hope Sherri is around to see the Fan Halen part.
:-)
Happy Tuesday.

That sounds like a really lovely date! And man, that story about your friend's sons made me laugh too! I feel bad, but it is funny!!

We always feel better when someone else has to worse than us. :x

Well seemed you had a great time!

I would have posted a video of Fan Halen, the David Lee Roth stand in was very entertaining and the Eddie Van Halen ripped on the guitar. But my little point and shoot captured lousey sound and the band was actually good.

You are TERRIBLE! ;-) I guess it's always good to be reminded that somewhere in the world there is someone having a crappier day than we are. *snicker*

WHAT! There is nothing wrong with a little ass grab!! I would have LOVED to have been at that dinner! I do love me a plethora of food choices!! Even for $65! Sounds great to me!

Kick that kid in the throat for me, will ya?

Now that my kids are grown, I wear their misdeeds like a crown! Look what I survived, no strike that! Look, I let them live! And I am going to tell the grandchildren every stunt they pulled! :-) Yep, I am Smiling!

You always crack me up ... we call ours the toast of the coast down here the for the fund raiser, it is always fun. Looks like that one was too.

"I am a horrible person because this story actually cheered me up and I laughed until tears were rolling down my face."

Omg ass grab. That happens at all concerts regardless the crowd's average age. Andy may or may not be known to grab a little toosh if he thinks it's dark enough too...

I am NOT looking forward to Sprite's teenage years.
And she will be shipped off to the grandparents if John and I ever want to go off by ourselves.

Excellent! Talk about a first class ticket to Hell.

Good for you for playing along though. Hope that guy didn't accost you too - wow.

At least you and your hubs go out on dates. And when other kids misbehave, it IS funny!

Geez, I'm sorry your son is giving you some headaches lately. He's gonna get his comeuppance when he has his own kids one day. Or we can hope. ;)

My father says "the sun never sets on the cool". and in his case he is so right!

PS Thank you for visiting my guest post at Amy's!

Yes, misery does love company! That's why I love your blog. . .

Nice catch with the butt grabbing. I'm glad you went to the cover show, they sound almost as cool as the real thing. So was the VH cover singer more of a David or a Sammy?

Nice randomness! What is it with teenage boys? You would think they were idiots? Oh wait...they are!

Someday I should post the story of what I got up to when my parents left me in charge of the house at 16, but my Mom reads my blog and she still scares the crap out of me at the age of 35 so maybe not.

Ugh...I can't even think about the teenage years...I am just trying to make it through 10.

Teenagers - well what to say. They can be disgusting but so was I as a teenager. Hang tight, stick to your guns and you will ride the waves. you will come through th eother side forgetting the horror in time. Just keep having more of those nights out so its all blanced out moreso.

Glad for a good date night out :)

Ass grabbing...scares me. Unless the 'right' person does it.

I laughed out loud too! And I agree with Jan, if that's all she came home to, she's a very lucky lady. Glad you guys had a super date night. Be aware of that hurricane forming in your waters; be safe.

The ass grabbing picture is classic ... If only the florescent pink band hadn't been warn it may have gone unnoticed!!

And why aren't middle aged rockers allowed to wear horns and grab a little booty? You're only old if you act old!

You had a camera?? Or was it your phone? I'm so impressed at you being that prepared for photos!
I know, it helps to hear how other people's kids screw up, doesn't it?

Maybe the shirt should have said:

I think I'm more troubled by the pink pants. Maybe if your son gives you any more trouble, you could tell him he's going to have to wear those pants?

your date sounds perfect, especially the 80s part : ) the pics were too funny.
i get scared when i read about what teens do when their parents are away--i have a few years to go w/ this since the girl is 12 and the boy is 9, but it scares me just the same.

I am SO not looking forward to Princess Nagger hitting the teen years...I think I'm in trouble. ;)

I must be a horrible person, too, because I laughed about those boys wreaking havoc while their mom was on vacation on the mainland... :)