A Christmas Trip Down Memory Lane

I went out yesterday and took photos and videos for a special Oahu/Traveling/Christmas Eve post. THEN, I loaned my camera to my daughter for closing night of White Christmas at Diamond Head Theatre. And, she decided to spend the night at a friend's in town. So, you all get that post next week for New Year's. I'm traveling to the past of last year's Christmas post instead....

I really looked for a Christmas song video, but none seemed to fit the mood. Since this is more than a Christmas story, but a story about family, I liked the feel of this song. My husband and I have 9 ethnicities between the two of us, and the only one we have in common is Irish. There's no actual video in this though, you can play it (or not) while you read.

Well, on to a Christmas Story.

The year we bought our home, my daughter was four and my son was one. That first Christmas Eve my husband had to work and I was home alone with the children. The baby went to sleep early, so my daughter and I had some special one on one time. On the second floor, outside our master bedroom, was a lanai (balcony) that we have since enclosed. That year my daughter and I sat on the dark lanai, looking out at the stars and sipping hot chocolate. She tingled with joy and excitement and her energy was infectious. Suddenly, she looked in the sky and said, “Mama LOOK! It’s Rudolf. I can see his red nose.”

As I cast my eyes upward, a saw a tiny red dot of light in the night sky. For a brief second that felt like an eternity, I would not have been surprised to see Santa, sleigh, reindeers, and all, come ripping past my house with a “ho, ho, ho!” It was only a moment later that I realized the red dot was a light on the top of a tower. But that did not change my moment. For the first time in over 25 years I experienced that sense of magic and wonder and believing in miracles. I was overcome with the feelings of an innocent child who believes and for a brief moment, I was the child I had been. I realized why adults like to be around children at Christmas. They help us become innocent and see the magic.

When my husband got home from work we took immense pleasure playing Santa together. Although we had bought a home, we had no money left over for furniture and the first two years the entire downstairs was like a gigantic playroom. A TV. A kids’ futon couch. Two bar stools and a high chair. For Christmas, we were giving our son one of those plastic basketball hoops (his second word was B-ball) and we played one on one rounds while we filled the stockings. I believe alcohol might have been involved. We had our fun.

The next morning, after opening maybe two presents, daughter felt sick and wanted to lie down. She had a 24 hour stomach flu bug. I spent the rest of the day cleaning up vomit and getting her to the toilet. Running soda crackers and 7-up upstairs. A few hours later the 18th month old baby boy got sick. The presents never got opened. My husband went off to work and when he got home at midnight he found me praying to the porcelain god. About two hours later it hit him too.

The next morning, the day after Christmas, my husband and I slept in a little bit – like probably 7 or 8, and when we woke up and came downstairs, we found two toddlers in a sea of wrapping paper. They had woken up, came downstairs, and finished Christmas without us. They had moved through the dining and living rooms as the wrapping paper storm took over. I can’t believe I don’t have pictures of this. We were so wiped out from having the flu all night that we just let it be. We sipped tea on the couch and shook our heads at the mess and eventually combed through it to make sure no small present got thrown away.

My husband and I have tried to give our children the childhoods we wished we had. Nothing that special there. That is what most parents do. We may falter, but I believe that most of us have the best of intentions. Christmas is a bit of a balancing act. The gift giving so commercialized and trying to enjoy the gift of giving to your kids without turning them into greedy little grabbers. 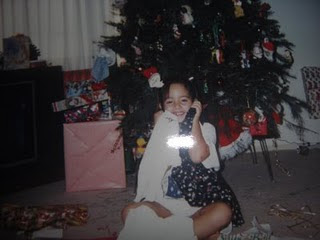 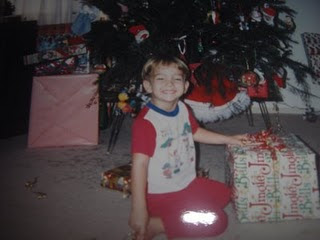 We have created our own Christmas rituals. Christmas cookie baking and delivery to neighbors and friends. Candlelit services on Christmas Eve. Special meals. There were our first five years here, when my husband’s grandmother lived with us. She had so much joy in seeing her great grandchildren on Christmas morning. 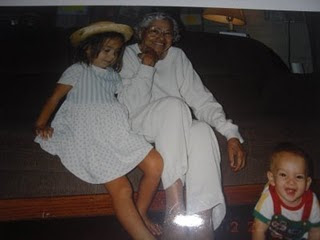 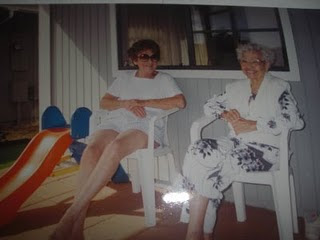 My Mom on the left. Hubs' grandma on the right.

My mom has come out for several Christmases. She can still be a bit of a handful. But making her a part of our Christmases always added something special. Giving the gift of forgiveness ranks high on my Christmas list. When my mom visits, I work extra hard before she arrives so that when she is here it is all the fun stuff. She has spent several Christmases with us here in Hawaii and sharing it with her has always deepened the joy. When she leaves, I forget the stress of one of her fits she may have thrown and try to only remember the smile on her face when she watches her grandchildren emptying their stockings. 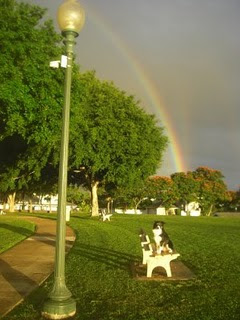 May your Christmas be filled with the joy of love and family. With the miracles of rainbows.
Happy Holidays from me and border collie.
Use Mr. Linky if you would like to link up your own Traveling or Christmas post.
Posted by Pseudo at 8:03 AM

This was wonderful Pseudo. Just wonderful.

what a wonderful tale...i love seing rudolph in the sky...too cute...i hope you and yours have a most incredible christmas!

Hi. I would like to wish you Merry Christmas and Happy New Year.

I think what I enjoy the most about this blogging thing are the way my relationship with each individual blogger is so different, but yet , in a way, all the same. My world is better for knowing you!

Do I remember this from last year? It seems so familiar. I love it (still).

I love what you say about your mom. So important. (And a good reminder for me dealing w/a family member...)

Thanks, and have a lovely day. I totally forgot it was Thursday and had something already planned (in a very lazy way).

Merry Christmas my friend. I loved this trip. Have a great time with your family. You are an amazing woman I am so glad we have met.

I never had Christmas as a kid and wished I could. Even understanding who I was and what made my own Hanukkah special, I still wanted to experience the Christmas traditions. Now, getting to give my child both, I am getting to be a part of it and am enjoying every minute.
Merry Christmas, Pseudo!

See ing Rudolph in the sky is a magical memory! THanks for sharing your Christmases past. Here's Hoping this one is magical too.

Thanks for a great year's worth of reading Pseudo!

Merry Christmas to you and your family.
xo

That's a crackup that your kids were all done with Christmas by the time you and the hubs dragged your sick booties downstairs. I have a similar tale, and I don't have pictures of that either!

Merry Christmas, Pseudo, to you and yours.

LOL, the best laid plans... Ah well, this was a wonderful "rerun." :) Sounds like such a lovely holiday time, back then. I hope your current and coming holidays are as wonderful!

Nice story - sickness doesn't care what day it is. It was good to read that you still enjoyed the gift giving and kids playing even if it was later.
Merry Christmas

Your Christmases sound so happy and fun (except the puking part). And I totally agree with you about the need to forgive. It is so freeing to be the forgiver.

What a beautiful story. Except for the illness--but I laugh to picture the stream of wrapping paper running through the house on toddler feet! Merry Christmas to you and all your family--forgiveness is good.

How do viruses time these things so perfectly! I bet every family has a stomach bug on the holiday story! Not that yours insn't the best Psuedo! I wish you and yours a Mery Christmas! It's been great to know you!

I love this story, even though I'm not generally a fan of vomiting.

I loved your story! Thanks for sharing it with us!

well, except for the barfing. :)

That was a beautiful look back, Pseudo! Well, except for the flu part... ;)

Wishing you a Very Merry Christmas! :)

What a great story! I'm so glad to find your site! I'll be back to read more!

I LOVE a holiday story that involves vomit.

No, seriously. So many holiday tales get bogged down in sentiment, to the point that the reality of our humanity gets glossed over...but a good vomit? Now THAT'S family bonding.

This is great...love having those brief moments when you believe again! Here's hoping you saw Rudolph's nose this year, too.

I adore the Rudolph story!! Oh the magic. It does get lost some moments as the juggling takes over, but thankfully it shines through again. Oh so thankfully.

Merry Christmas dear Pseudo - and the happiest of New Years!!

I hope you made more memories the other day. Have a great weekend.

Merry Christmas. I love the unique memory, I'm sure when you were living it though, that stomach flu Christmas was something to get through. We had my youngest spewing from both ends this entire last week, it definitely made our celebration a little more challenging. I'll have to live down the exhaustion before I can retell the tale though. ;)

what a beautiful memory you have there... i hope your christmas was a merry one!

I enjoyed this post very much! I'm glad you wrote it down for posterity!

Merry Christmas and may your other Christmases...unlike that one...be free of vomit! We had a Christmas like that too!

I LOVE the Rudolph anecdote...you had me going, too!!! Simply magical!! You are a wonderful story teller!!! Hope you had a fantastic Christmas! And that NO ONE got sick this year ;-) Love to you and yours, Janine XO

Thanks for sharing these vivid memories. May your year to come be full of happiness, health, prosperity, and creativity. And - may you find time and space to do the writing that you want to do!

Those smiling pictures are adorable. My parents spent Xmas afternoon with us and seeing them with my kids made me so glad to have them close by.

Awesome Christmas memories (well, except for the pukey part). :-) Thanks for sharing them with us, Pseudo!

Beautiful memories(well, not so much the 24-hour family flu bug)and that part about your daughter seeing Rudolph's nose had me on the verge of tears and *almost* remembering what it once felt like to be a believing kid.