Due to the unbloggabble events of the last four months, Christmas was a bit different this year. We did not break out the décor nor put up a tree. A wreath was it. We did not buy presents, except for a few token items. We spent what money we had going out a few times as a family.

Sunday we went to the movies and afterwards had pupus and drinks in the late afternoon at Gordon Biersch in Aloha Tower Marketplace. The restaurant has tables outside, right on the water, and you can watch the boats, stare at the ocean. Very relaxing. We reminisced how we used to come during a couple of summers after a movie matinee for the kids’ birthdays. We were awful parents. While we sat there and had a couple drinks, Teen Boy, who was then eight and nine, would whisk around the outside on his heelies. Along the dock, next to the water. Fun times.

Anywhos, on Sunday there was a GIGANTIC yacht tethered along one whole side of the dock, blocking half the view. La Masquerade. Hubs and I were marveling at how detailed and sleek it looked. We contemplated whether or not it was owned by an individual or a company. There were three young men in white “yacht boy” shirts polishing the rails. Nice looking men. Almost like models. Killer Ray Ban styled sunglasses. Hubs and I went into a shtick of what the Yacht Boys might service as a part of their duties. Whether or not they wore their shirts while on the open ocean or went bare-chested. Daughter, now 20, was chagrined. Teen Boy had ditched us for the day, but I think he would have been more open to our antics.
* * *
The last week has been cold for here. 60’s and 70’s. Yesterday I decided to make pea soup with the leftover ham bone from Christmas. So of course the weather warmed up to mid 80’s. House was hot. Everyone was gone. I was cleaning house and cooking in shorts and a little tank bra thing. Midriff exposed to cool off. I went to stir the pea soup, a little too vigorously, and a small spray of boiling hot, sticky, soup splashed across my tummy like an impressionist painting. It looks like I have the Hawaiian islands in red welts.
* * *

On Traveling Thursday I will be featuring the beach we have been heading to over the break. It’s on a reef so one can swim in the blue holes and not worry about the humongous waves. Border Collie is sassy and sticks tongue at you all. 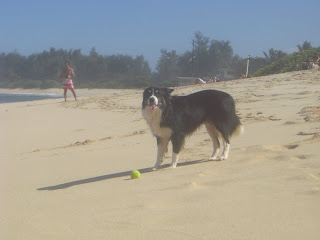 For more Randomness, head on over to Keely at the Unmom's.
Posted by Pseudo at 8:49 AM

Labels: if I had a yacht boy - nananananana, Random Tuesday

Our older kids would have joined in on the "Yacht Boy" banter, but it would have embarrassed Miss J and The Young One to death.

I probably, OK likely, would have contributed naughtiness to the description of Yacht Boy duties. All in good fun!

I want a yacht boy!

Oh that sassy BC! :P

Sorry about your Hawaiian welts. :( I hope the soup at least turned out yummy?

Hope your stomach heals soon! So jealous of your 'cool' weather. It's in the teens and twenties here this week. Brrrr! Love that picture of the collie and can't wait to hear about that beach. Hope 2010 is much for you than this year!!

Love the yacht boy story. We would be right on it with you. Making up shit about random strangers is a favorite pastime...

Try to enjoy some of break while you pack.

Oh Pseudo, I LOVED this. Lucy loved to people watch and make up stories about what they were doing or where they were headed. We always laughed because by the time she was finished with all her suppositions, they became fact in her head. LOL

Wish I could have been there.

Sounds like you have had a fabulous time. We too, did Christmas different this year and it turned out amazingly well!
Loved the Yacht Boy story. I love to people watch and PS and I like to make up stories about them. Sure we could have come up with a doosie for the Yacht Boys.
Hope your tummy heals quickly!

We love making up stories about strangers. People watching is the best.

It actually got in to the 50s this morning, after having a Christmas temp in to the 80s. Winter in Hawaii sounds similar to that in sunny South Florida. Hope your tummy heals up. I'm still nursing a steam burn from last week. Fun.

I'm right behind you, ready to swim in that lagoon with no waves. Our warmest temperature in summer is a cool 73, which we call HOt and uncomfortable.

After a few months of winter blues, I can imagine a swimming hole with air in the 80's.

It sounds like you parent much like I do. We don't hold back on the banter in front of the kids and we encourage them to join in. Sounds like a fun exchange between you guys.

Glad to hear that Christmas was relaxed and grounded. We went for the same look this year, too.

The pea soup story had me wincing in sympathy. Maybe you should send it here, where it's plenty cold enough to enjoy!

It does sound like you had a nice Christmas. I would have gone on the boat with you..

Our Christmas is getting smaller and smaller each year and that's fine with me. I almost didn't have a tree this year and we never got it completely decorated. So lazy!!

Can I have my own little yaht boy? I have some things he can shine around here.

Darn it I just spelled YACHT wrong. I wish I could say I was drinking and blame it on that.

Really enjoyed your "yacht boy" observations and imaginings(my husband and I do that a lot, too)and your different take on how to spend Christmas.

I kind of like the low key Xmas with minimal decorations.

Wishing you and your family a very happy 2010!
xo

Happy holidays! You are making a good lemonade out of lemons. Let's hope all the unbloggable issues will work out soon.

I'm really looking forward to embarrassing the crap out of my kid like that when he's older.

*files yacht boys away for future use*

OUCH on the pea soup incident! Hope the islands are shrinking and won't leave scars.

I hope the unbloggable items are no longer an issue? (Whatever they might be)

You gotta be careful with hot food. I pulled a turkey out of the oven one time and it slipped and turned over on my foot. I still have a huge scar on my foot!

Interesting Christmas--I have an auto post sent for tomorrow's Travel Tips... If I get back online, I'll put the link in. Have a happy New Year

Ahhh...yacht boys. I guess one should live on open water to want those, huh? Even so, they sound divine.

What I wouldn't give (if I had anything worth giving) to be in 80 degree weather right now. I'm sitting here all wrapped up in a blanket.

Ouch with the belly burn.

We get so many yachts out here in summer; would have loved to hear the yacht boy schtick!
Sorry about your tummy, but I'll bet the soup was good!
Can't wait to hear about your beach vacation.

Beach and boat....how quickly could I get to both of those....

Hope you have a wonderful 2010! Filled with love, health and prosperity!! *hugs*

A happy healthy & prosperous 2010 to you and all your family--with NO "unbloggableness"!! Hugs to you.