I’m attending a workshop the first three days of June. Yesterday (first day) I had to go around the building, up the back stairs, through the main entrance on the 2nd floor, and take an elevator back down to the first floor. We were told the school where the workshop is being given was on “lock down.” The only lock downs I’ve been involved in had to do with riot like fights on campus involving over 100 students and car loads of young adults from a neighboring school, complete with pipes and chains. The school with the workshop is on summer break and quite empty except for admin offices. So, we ask. Apparently, an irate parent made a threat of some sort. Seriously, teaching is getting a bit surreal. 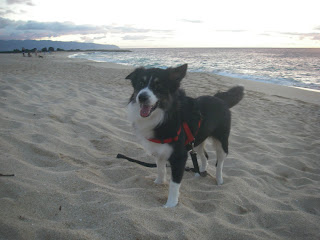 Took Border Collie to the North Shore for our first summer beach walk on Saturday. The North Shore had its last swell of the season and I stopped at one point to watch the surfers. Meanwhile, ghetto junk yard black dog sneaks up on us and attacks BC. He’s got BC pinned and is trying to grab BC around the throat. My bad ass self does not hesitate, but jumps in and starts whaling on the dog, slapping it in the face with the wonderful weapon I had in my hand. My rubber slipper (flip flops to you Mainlanders). Screaming in the dog’s face, slapping the dog’s face, he finally lets go of BC, who does not back me up but runs for the life guard stand when released. Ghetto dog stares at me for a second while I wield the deadly rubber weapon at him, then the dog turns and trots away. Meanwhile, I realize the lineup of surf watching peoples are all staring at me. What a sight I must have been. At least no one was laughing (I might have taken a slipper to them for not helping out).

Shopping for Son’s graduation required clothing (white shirt, black tie, black belt). I go into a surf /skate store for the black belt, figuring might as well get a belt he will wear more than once. The store has the soft Tees that son likes and I’m thinking maybe I’ll pick him up one as a little something extra for graduation. The sales guy is very cool and helping me out and asks me if my son likes the BJ Penn shirts (there are three stacks). I’m like, “BJ who??” He says, “The MMA fighter from Hawaii.” I reply, “yeah, that’s a great grad gift, a shirt that says ‘I like fight. Try me out.” The sales guys laughs and replies that he himself cannot figure out why so many young guys wear ‘Tap-Out’ and BJ Penn shirts when it is a walking advertisement for fighting.

I haven’t participated in Random Tuesday in weeks (months?), and not sure if coming in a day late counts. But go and head on over to Keely’s for more Randomness.

My brother wears a lot of tap out t shirts. I never realized that what it meant (duh me). He loves boxing and martial arts though so it's not a big surprise.

You're lucky that dog didn't turn on you! Glad your doggy made it out safe!

Poor BC! Is he all right? And YOU - you rock! I'd have been applauding you when it was over, if not helping.

You can be as late as you like, we're just glad you're here!!

Ha, showing up a day late probably means you win the PRIZE for randomness!

Your summer is certainly starting with a bang, hope things get a little calmer as the summer progresses.

My dog was on the receiving end of a shoe once. She wasn't actually attacking, she just wanted to play, but she burst out of the yard and the guy picked his punt dog up as a cautionary measure. And because she's SO well trained she tried to climb him to get to her 'friend'. He had his shoe off and was beating her over the head ith it by the time I got there. Kind of served her right, actually, but I think the dude was a little freaked out.

Anyway. Glad you're both okay :)

You can come beat my dog with your flip flops any day. I promise I won't laugh at you. In fact, I'll buy you a case of wine.

You've got ghetto dogs in Hawaii? Man! And you saved your dog from a sure-loss fight? Girl! You are tough-tough enough to teach any punk-faced mouthy teen out of the hood.

Enjoy your workshop; your time out; your boy's graduation.

Way to go, Pseudo, for being one tough doggie mommy. And Keely, I feel your pain. I, too, have well behaved dogs that never jump. They haven't been whacked in the face with a shoe yet but I might suggest it for future visitors. Though I have thrown empty soda bottles/cans at the in a vain effort to get them to STFU. One in particular...

OH MY GOD. A) Are you okay?! It sounds like you did fine vs. the dog, but I just wanted to be sure. And B) Is BC okay?! Poor little guy. I mean I know it would have been nice for him to stick by you, but he had already been terrified, the poor little fella...

You, on the other hand, are obviously fearless. Props to you!

You have some good random thingys.
What a mess, an irate parent can cause a lock down! Hope your workshop goes well.

Wow ... a lock down ... can't believe what happens in schools these days.

Glad that BC is okay ... and that you were there to save him. We've had a few dog attacks in my area lately ... it's scary!

Enjoyed your random thoughts! Thanks for sharing them with us!

Looking forward to the graduation? Pleased, relieved, proud, all of the above?

I hope the irate parent has had its butt well and truly kicked, celotaped and stapled, there's no excuse.

Happy Belated RTT!!!!! I'm glad you were able to fight off that dog, what is it with people and unleashed dogs? it's just not right.

remind me never to mess wiht you...smile. and parents can be such nuts sometimes...

The fact that I knew what MMA was scares me. Seriously.

Dude, maybe you should be sporting the TapOut t shirt. You're one tough lady, with those flip-flops.

Did the questionable hound have an owner nearby? Or did you call the cops? I'd be all over the humane society with that biting beast.

Yikes on the BC attack. You are a good mommy.

Sadly, a lockdown due to irate parent would not be unusual for me. We haven't had anything that hairy in a while. No, I lie, I talked a kid down from jumping the guardrail to the highway yesterday. Things I can say on your blog and not mine. ha.

I love the random catch up posts. They are like a long phone call. Happy graduation!

I'm thinking the school could have used your rubber slipper karate chop on that irate parent - you guys need flack jackets.

But seriously, why would you say "rubber slipper" when flip flop is just so much more fun?

I hope BC was okay.

You are a badass, attacking that dog. I would have done the same exact thing, glad BC was ok and the nasty dog didn't hurt you guys.

Lockdowns are scary. We had a few at the school I worked at and it was never fun...

What great random. Our HS does random lock down drills, a couple each year. But never the real thing. Funny how that's now a common expression we all recognize. Or sad.
Love your dog story! I'm sure I would've done the same thing!
Rubber slipper equals flip-flop?? Who knew?

One more reason I should remember to bring a can of mace on long walks. Hope BC was okay.

My daughter's middle school had three different bomb threats called in while she was attending. It was a little scary, the most recent erupted in total chaos when they decided to release the students to a nearby park, kids were jumping community walls, parents were parked in the street. It's like nobody ever thought to put together a plan.

Ack, I'm glad your dog was ok and that you were able to scare the other one off.