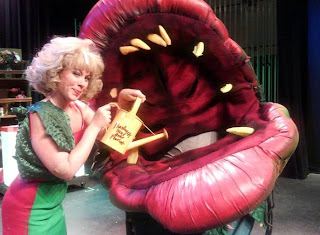 I've got a new pet/charge/responsibility. Sunday, while I was watering the backyard, a baby myna bird fell out of its nest. Smack dab in front of the spray on my hose. Got blasted and tried valiantly to wobble away.

Now it is living in a bowl in our laundry room. I've tried nursing two baby birds in the past. They died. My hopes were not high for this little guy. However, this one is different. From the first time I tried to hand feed it the little mouth opened wide like the plant in the photo. It nestles in my palm. I think it has a chance. Now I need to figure out how to know when to let it go so I don't wake up one morning to a teen bird flying around my house and breaking it's neck on one of the windows. Anyone out there been here?

How about those kiosks in the middle of the mall with the more than slightly pushy sales people? I met a friend for lunch yesterday at Ala Moana (Cafe at Nortstrom's - highly recommend the place). My friend was a bit late and had an entertaining tale of being accosted by the woman in the hair straightener booth. The woman had half my friend's hair straightened when my friend was all like, "dude - I GOTTA GO. I'm late for a lunch date. And BTW, I cannot afford a $300 hair straightener." (Not to mention we were meeting because she was flying out last night for a three week vacation that includes an Alaska cruise - so she needs all her cash for spending on the trip). The woman told her to SKIP lunch and use the money for the hair straightener instead. A LAAAAAAAAAAAAA (local saying) or HELLLLLLLOOOO (little more haole for you all). Then saleswoman dropped the price to $200. My friend did not buy it, however, she did come to lunch with half straight hair.

For the record. When I was at the mall buying Son's graduation clothes a couple of weeks ago, Daughter spent a little too much time in Victoria Secret's. So I was cruising outside when I was convinced to sit in the hair straightening booth. In my defense I warned the woman all my money that week had to go to a graduation dinner. I let her do ALL my hair. It really was pretty. I almost even bought the dang thing. MY price was $100.....

A little about blog commenting. Some bloggers have this newer type of blog where you have to post as a guest if you do not subscribe. For the record, this is not my favorite. Old habits die hard, but I like using my follower gadget. I don't like the fact that as a guest the contraption does not use Pseudo, but uses the email to create phhhst as my guest name. Ugh.

For more random,head on over to The Unmom's.
Posted by Pseudo at 9:14 AM

I can't believe the price varied that much between the two of you! I agree that the expensive straighteners really do the job, but who has that kind of money?

I hope your baby myna bird continues to thrive!

Oh that commenting thing would bug me too.

What have you named the little bird? Congrats on the graduation!!!

Hey! Thanks for having me on your sidebar Pseudo. You're swell.

we agree on the commenting...thats a hassel...

lol on the people at the mall...i have had my fingernails shined, which is kinda weird...

hope your little one makes it...

we agree on the commenting...thats a hassel...

lol on the people at the mall...i have had my fingernails shined, which is kinda weird...

hope your little one makes it...

If the baby myna bird survives, maybe you could get a pic of it before you let it go. Would like to see it.

I want birdie pictures! How cute is that? You have a graduate and a new little one all at the same time. No empty nest for you, huh? Hee hee hee.

I don't like those new "commenter" thingies either. As for the straightener? maybe next person to go in should check the company that supplies them and ask "their" price?

I don't like the blogs where I have to go through aerobics to leave a comment, especially since I'm not on one of the common blogging platforms.

Those kiosk hair straighteners do work great, but the price variation ( I did pay $100)makes me wonder how much they are truly worth.

I'm with you on the commenting thing. Good luck with the bird...I hope it doesn't fly into your (straightened) hair!

The last person in a booth in the middle of the mall who accosted me ended up apologizing profusely. Being threatened with assault will do that to you.

NO, you canNOT look at my nails/hair/eyes/underwear. Deal with it.

I have never straightened my hair, but thinking about trying it. Not for $100 though... :-)

I hope this baby bird has a happy ending.

Baby myna! You should teach him to talk a little before you let him go. It will really impress the other birds.

The kiosk people drive me insane. Who just grabs a stranger's hand and starts buffing her nails?

Gah! I loathe the kiosks. They have one where they photograph the kids as they walk by then try to talk you in to buying a product with their face on it. I'm an expert at dismissing them, today they got an unsuspecting shot of my niece that went up on their big screen, when she turned around and saw her mug on a high def screen she almost died. Hilarious. We still didn't buy squat.

I hope your baby bird lives, my dogs eat all the ones that tumble out of the nests before we can stage a rescue.

That's hysterical that your friend showed up with half of her hair straight!

You are a better person than I am with the bird. Birds. Shudder. Totally agree on the comment thing.

YOu are so sweet. Good luck with the baby bird.

I hate those pushy sales people in the mall. Here they are always pushing hair extensions. It's mean, but I just put my hand up and keep on walking. I've been asked about 800 times. Grrrrrr

I hate being attacked at the mall. I had a guy try to forcibly squirt hand lotion on me once, I thought Secret Agent Man was going to kick his ass.

Oh, I want a baby bird to take care of! The poor thing. I hope he makes it.

And I've missed you!

That poor sweet bird. I hope all goes well with it and that it lives to fly away safely.

That is funny that your friend showed up with half straightened hair...I cannot imagine spending that much on a straightener...I really do wonder how much they are worth if they can change the price at such extremes.

Hope you are enjoying your summer ! XX

Those kiosk people are crazy! I've heard if you avoid eye contact they aren't supposed to talk to you so I always look down and walk away!

I tried to nurse a bird back to health once. Without success. Then again last weekend we found one in our driveway who was out for his (or her) first flight on a very windy day. This time, we simply moved it to a different location. I heard it didn't make it. Makes me sad.

Aww, you're a momma bird! I hope the little chick does well with you...

We have those survey people at our mall that practically run you down and I say "no thank you" over and over and then I want to snap and murder them but I've usually got my kids and that's not a very good example to set. The kiosk people are annoying too but them, I can handle.

Now I want to go to the mall and have my hair straightened. What fun! I love it that your friend went to lunch with her hair half done. LOL
I don't like those new fangled comment things either. You know....when I do comment. *sigh*