October is breast cancer awareness month. Think pink. Encourage someone to get a mammogram if you know they have been putting it off. Check out Thistle’s idea of having a group mammo outing: The Pink Ribbon Club.

If you haven’t been knocked silly with Palin news coverage, consider these:
Michael Berube’s thoughtful article.
Or at Salon there is The Dumbing Down of the GOP or How Sarah Palin Blew It.

I got an email with a copied and pasted post on the Alaska Women Reject Palin Rally. I googled it and found the original post, which was September 14th, so I imagine it is old news for most. But it was the first time I’d seen it. The post says to share the pics so here are a few. 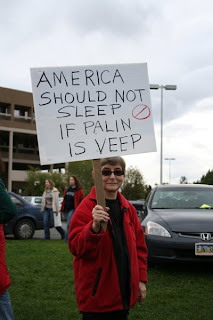 "So, if you’ve been doing the math… Yes. The Alaska Women Reject Palin rally was significantly bigger than Palin’s rally that got all the national media coverage! So take heart, sit back, and enjoy the photo gallery. Feel free to spread the pictures around (links are appreciated) to anyone who needs to know that Sarah Palin most definitely does not speak for all Alaskans. The citizens of Alaska, who know her best, have things to say." 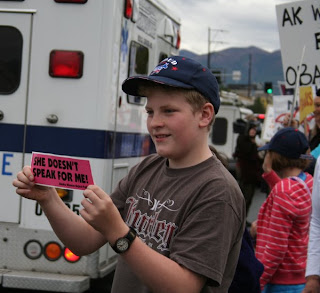 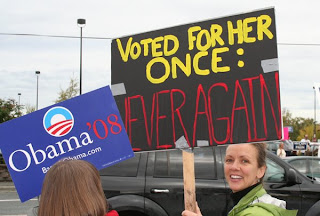 "Never, have I seen anything like it in my 17 and a half years living in Anchorage. The organizers had someone walk the rally with a counter, and they clicked off well over 1400 people (not including the 90 counter-demonstrators). This was the biggest political rally ever, in the history of the state. I was absolutely stunned. "
For more pics plus a video, head on over to Mud Flats.

1400 people? Isn't that everybody in the state except Palin and her kids?

I LOVE mudflatts, i want to send the link to cheer up my friend who is under the impression that SP is going to win big (she must be watching too much Fox or something) but that might blow my anonymity, and i'm just not ready to do that :(

and honestly, is an 8 letter word verification really necessary?!!...my eyes!!

Thistle - you can comment on whatever you like here. Can you send the link to your friend via your "real" email?

Can you tell I spent too too much time of my first day on break sitting on my butt reading the internets.

Pseudo - I missed that you are on break. Cool!

I loved this email when I saw it. I am usually not in favor of watching media that is slanted either way, but these days it is helpful and hopeful. Only a few short weeks left, and I our guy will win.

WOW, this is the first neg stuff I have seen on Palin! I have 2 friends that live in Alaska and I asked them what they thought of her....
Well, always good to read both sides, I will check out the links

Last time people voted for the guy they'd rather get a beer with and, gosh darn (wink) that sure has worked out pretty well.

I'm sure votin' for the gal you'd like to go moose huntin' with (and her dad) is a real good idea, too.

Maureen Dowd had a great column today (New York Times)--check it out.

Movie - I absolutely hate going back to work in mid-July, but when the October week off comes along it makes up for it a little bit.

VM - I'm pretty sure CNN knew about the rally, not sure why mainstream news opted out...

Mcewan - thank-you for being open-minded and hope this didn't offend you.

justb - winkwink right back at ya.

This is heartening! Thanks! I needed some good news today!

Yowza! That is very odd that the media didn't pick up this story. The biggest rally in state history? Isn't news?? Hmm...

I'm going to wrangle up the kids and grab a minute to read this stuff.

Thanks for posting it!!

Have you seen the email where they call her a post turtle? Riding on the range and coming upon a turtle sitting on a post. It has no reason to be up there and it couldn't have gotten there all by itself... Post Turtle.

Thank you for the links. I just read them and they echo many thoughts that I had.

Hi Caroline - welcome. I'm not sure what a post turtle is; that one never came my way. But I'll look it up and see waht you mean.

Everyone - thanks for stopping by. Gonna run off and watch the post debate stuff.