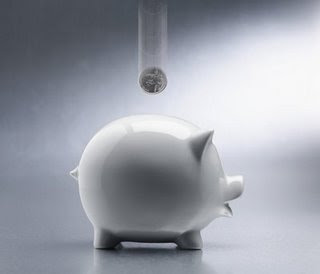 Words of Wisdom from a Smart Mouthed Broad hosts a very cool blog theme, Money in the Bank. I’ve written a couple of posts for MIB, but truth be told, I am not creative with money saving ideas because we never have much after paying bills. We stopped going out to eat except for rare occasions years ago, I hardly shop, and we rarely travel. The smartest thing we did was to buy a house. Then we never did anything else except make mortgage payments, raise children, and go to the beach. Which is mostly free except for the gas...

My friend P is hosting a potluck clothes swapping party next week. This idea/event is one I’d forgotten about and is a worthy enough to make mention. P is hosting this one in the name of Earth Day, but we have been doing this for years. Most of my circle of friends come from my days of working in restaurants. Most of us have been friends for over 25 years. Some, like me, have gone into professions that provide a living but where one will never be wealthy in material things. A few others have done quite well financially. There is a definite advantage at the event for those of us less wealthy, but my more affluent friends are happy to leave with less than they came with and have room in their closets once again. They enjoy passing their clothes on to their friends much more than getting the tax break for donating them.

So, once every couple of years, we have a clean out your closets party. Everyone cleans out her closet and brings the unwanted items. Each of us brings a dish for the potluck and there are several bottles of wine. We throw all the clothes into a huge pile and then go through it after eating, but of course while still drinking. Redistribution.

It is a great money saving idea. Loads of fun with friends. Have a fashion show. Walk about half nekkid. It’s just the girls, you know?

And, speaking of Earth Day, I came upon some really good reads lately for those of you who are interested. Salon has these articles:

Can we afford to eat ethically?

We are what we eat.

I also have been following a blog, Reduce Footprints: Easy ways for each of us to reduce our footprints on the earth. I found the series on the Rainforests really interesting and well written. There are parts one, two, three, and four.

And while we are on the subject of green, let’s go full circle back to Smart Mouth. She gave me something green for the blog.

Smart Mouth passed on the Zombie Chicken Award to moi.

I love you Smart Mouth. But, seriously. I really would like to have the time and tenacity to find the blogger that created this one. What was he or she drinking? The award definitely stands out in the crowd. And in the theme of things, the zombie chickens probably represent what we have to look forward to if we don’t take better care of the earth. 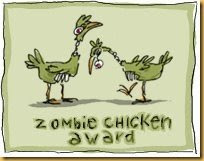 It comes with this description:

The blogger who receives this award believes in the Tao of the zombie chicken - excellence, grace and persistence in all situations, even in the midst of a zombie apocalypse. These amazing bloggers regularly produce content so remarkable that their readers would brave a raving pack of zombie chickens just to be able to read their inspiring words. As a recipient of this world-renowned award, you now have the task of passing it on to at least 5 other worthy bloggers. Do not risk the wrath of the zombie chickens by choosing unwisely or not choosing at all...

Well then. That snazes it up – quite a wonderful write up. Thank-you again Smart Mouth for such kind words in my direction.

While there are many blogs out there I’d crush a zombie chicken’s skull to get to, I’ll pass it on to these must read bloggers.

Captian Dumbass at Us and Them

Braja at Lost and Found in India

I LOVE the clothes swapping party, what a great idea to get rid of what you don't want and get something newish! Will be visiting your recommended readings over the next couple of days.

Congrats on the Zombie Chicken Award and I, too, would love to know who dreamed this one up! If you find out, please share!

Thank you! I was reading through this post and loving it. Got down to the award and was happy for you, of course. Then, I was thinking, "That's a great list of blogs" when lo and behold - there I was! I am very honored.

My friend Angie and I do a version of the clothes swap too! Or really, I shop at the Mall of Angie, because she *actually* likes shopping, so I just help take a few things off her hands to make room in her closet. ;)

I love clothing swaps and love buying second hand clothes. I have those 4 sisters - we used to switch clothes a lot more than we do now, but it is really quite fun.

That zombie chicken award is a some funny stuff.

So that's why Braja just came by to chat...

That award is awesome, simply awesome, thanks Pseudo.

My wife does those clothes-swap things and I'm NEVER invited :(

I have to say, the other night I was sitting here in my pool of insecurity thinking, Geez I don't get a lot of awards... and now

Thank you so much. I am now drying off all the self pity and moving on to breakfast.

BTW- I love reduce footprints. She is amazing. I have learned so much from her.

WooHoo! Awardified! I love the swap idea, that's great. We've started saving the money we get from taking our recycling in and saving it in a little pot. Once we have enough we take the family out for lunch or something.

PS. I have not forgotten about the meme.

I wish I had friends that lived closer, but y'all are scattered all over the country. Heck, all over the world.

Wow you are getting awards left and right. Congrats. I like the idea of a clothes exchange.

A clothes swap, you say!?!?! That sounds awesome. Mine are all crappy now from living in the heat and dirt.

We have done a few clothing swaps here in Austin, where we're muy wannabe green (and sometimes really green). The swaps are lots of fun and you get to meet new people too.

That pot luck clothing swap sounds like a fun idea. Too bad all of my friends are skinny (and swear they're fat) so until HASAY kicks in, no clothes for me. Congrats on the zombie chicken award!

I ran right over here when I saw the word leftovers. I'm on a post-vacation diet and .... I was hoping for a morself of food. I'm starving .... Sigh!

Great idea and it sounds like so much fun. You're linked!

Sooo many great posts here to catch up on!! I just did a quick scan thru and will need to come back with a cup of tea so i can settle in and really enjoy...but i will say the trip to the vets had me laughing out loud...poor BC...

but what i really want to know is where do i go to vote so i can help you kick Dooce's ass...i'm so out of touch right now, but i saw that mentioned over at Movie's site...need to know what's going on here...i'm more interested in this than our upcoming provincial election :)

I LOVE that idea!

And the Captain is soooo deserving of the zombie chicken award.

What a great idea!! Congrats on your recent awards. Sorry I haven't been around lately but life has been a little too crazy. So now I am trying to play catch up but doubt I will ever catch up!