Spring Break is almost over. I spent way too much of it doing forgetable things like house fixing up projects, grading, prepping lessons, blah, blah blah....

We celebrated our 20th anniversary with a couple of lunch dates. Same with hubs birthday.

Oh. I read all four books in the Twilight series. Days lounging around in PJ's with Bella, Edward, and Jacob.

My friend P called and asked if I had anything fun planned and I did not and she asked if I did one thing what would I like it to be and I told her hiking.

Be careful what you ask for.

I've been all sassy pants with my speed walking and beach walking. P took me a couple of miles UPHILL to the top of Kuliou'ou Ridge. I was a bit pathetic in the amount of times I had to slow or stop and catch my breath. Casual chatting was out about 20 minutes into the hike. My digital camera stopped working at the beginning of the break so I asked P to bring hers. After stopping her three times to take a photo she let me carry it. Which gave me a good excuse to stop some more.


The beginning of the hike looking out over Kuliou'ou Valley. 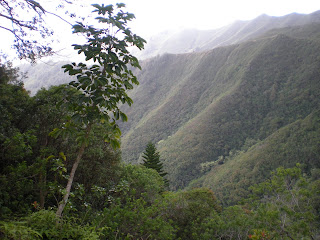 I loved this tree. I thought it looked like something that could come to life, shake my hand for making it this far, and toodle on behind me if it felt so inclined. 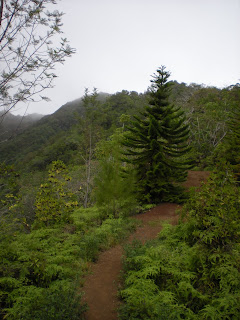 The bushes and ferns were incredibly beautiful. Here we are starting to get a glimpse towards Hawaii Kai. 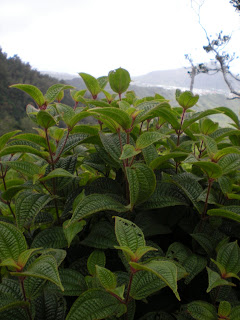 Hawaii Kai and Kokohead Crater in the background. 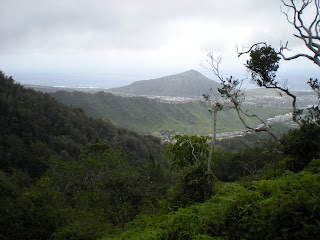 These berries were all over the place. 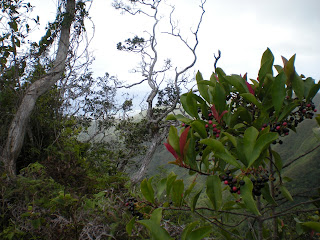 Yeah, there were several places like this. This is one of the last hills before the top. On the way down I slipped once and fell on my ass. P was surprised to see that after that I chose to sit on my ass and slide down. It was actually more fun that way. 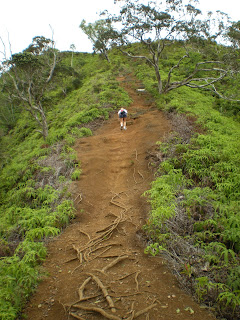 Despite my panting and near dizzyiness, I was so proud to get to the top.
Amazing, isn't it? 1,929 feet above sea level. 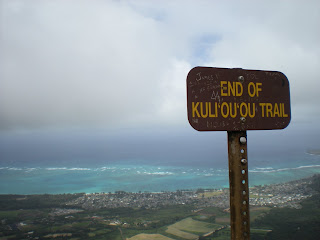 Seriously. I want to go again. It might take me longer than most (I was not so thrilled with the two twenty-someting young ladies who blazed past us on a steep hill, talking nonstop...nor the woman with her four children who also passed me up), BUT I MADE IT!!
Don't expect Friday Fotos like this too often. I have to recup you know.
For more Friday Fotos, head on over to Candid Carrie's.
Posted by Pseudo at 5:37 PM

Beautiful scenery, as usual. It's going to snow on our Spring Break this week. :(

Glad you made it back down in one piece.

Dare I ask if you enjoyed the Twilight saga?

We have spring break this coming up week and I'll probably be hanging out around the house like you did. Well, and sand bagging it. We've got a friggin flood going on here.

I won't even ask how your glutes feel. I can smell them burning all the way in Dallas.

But fabulous return on pain investment!! We hiked when we visited Kauai - I was just amazed at the extremes of the terrain. Not something I pictured before I became a visitor.

As always, thanks for sharing the incredible beauty.

Happy anniversary! I wouldn't have made it through the hike, I spent today doing DIY projects and I'm about to pass out from exhaustion.

And lovely photos! I have to get to Hawaii one of these years before I croak.

Don't you worry about people passing you by. At least you made it, and that's what counts!

The last one is an incredible shot. I love views like that - who doesn't? - so liberating.

Beautiful scenery and obviously not a climb for the faint hearted! The scenery from the top seems to have been really worthwhile though.

Wow, that view at the top made the hike worth it, I'm sure! Good for you for being so active, even if you were slower than others.

This is a good description of how I hike with the other half. I have to stop OFTEN. I can walk for hours on relatively flat trails, but once we get any elevation, I need my breaks.

How many feet was the ridge at?
Happy Anniversary, Pseudo!

Such Superior Snaps! I think I would have done a little huffing & puffing myself, though. Our SB just started, and is the quasi-them of Sx3 today. Please drop by to share the Caption Love!

Gorgeous - have had to stop showing your pics to the pilot Pseudo - his resolution to emigrate to Hawaii gets worse each time! x

I'm thinking you must not be in too bad of shape to make it up that hill. Thanks for the vicarious hike. I'm thinking I don't have to go to the YMCA now. Such a beautiful place you live.

I'm impressed, girl - I don't think I could have made it, not these days. I'm definitely going to have to do something about that...

Gorgeous, gorgeous shots - I haven't been to Oahu yet, but now I'm going to sort of nag Beloved about it.

I'm also interested in what you think of the Twilight series; I'm re-reading it, to see if I missed something that will change my opinion of it. Not yet, so far.

I think taking this hike qualifies your spring break as "unforgettable." Thanks so much for sharing these gorgeous photos. Almost like being there!

Hi, just stopping in from SITS to say hello. Beautiful photos - that must've been one heck of a hike!

Amazing shots! It is stunning - I would love to have been with you on that hike!

Those pictures ARE amazing! Sooo, I didn't see an escalator...I am assuming they don't have one? Was there at least a bar at the top? Anything? LOL!

Congratulations on making it to the top. What a great hike, and photos. Kudos to you, and a belated happy anniversary.

What? No chair lift? Seriously, how do you live in such primitive conditions:)

You're my hero. Thanks so much for taking us along. This hike is beautiful. We have NO elevation anywhere near where I live. I get so tired of flat ground.

Have you been watching The Wizard of Oz on your break? Just wondered. Talking trees that shake your hand....just sayin. *wink*

Now it's Monday and you're back at work. I hope it's a good week for you.

As someone just starting my spring break, I'll keep this hike in mind. I'm more of a speed walking up and down soft hills kind of a girl.

Just thinking about the altitude makes my ears pop, I'm a flat land kind of gal. But those photos, those luscious views. Just breathtaking, I'm jealous.

Beautiful! I'm one of those annoying hikers. I hiked up the side of a "mountain" in Ghana when I was 6 months pregnant. And I was not the slowest person on the hike by far.

Happy Anniversary! Glad you had a relaxing spring break!

When I see your posts on your hikes, I do believe you are the luckiest person alive to live in such beauty!

Love the tree that wanted to introduce himself!!

I especially like the Red Wagon Trilogy (which you started on my bday). What a lovely vehicle for wisdom and wistfulness.

I, too, had a red wagon at the top of the list for things my children would need. My in-laws bought Oldest a very fancy one that sat in the garage holding odds and ends year after year. Which led me to the conclusion that simple things should stay simple.

I'm celebrating my ten year anniversary this week, so congratulations on the 20th!

What gorgeous pics. Congrats on your 20th anniversary.

Problem one of the only things I like about L.A. is the hiking trails. We have one path I call "the stroke" yes, b/c every time I climb it I am so out of breath I think this is it, I'm going to stroke out and not make it back

I LOVED your description of that tree. Once you wrote that, I could totally imagine him coming to life.

It's all so beautiful! Look at that view!

Wow, I think I could fall in love with Hawaii. That's the sort of bush walk that I love. Mind you I'd prefer going down hill.

This is beautiful. If I can ever get myself back to Hawaii for a visit I'll ask you and P and even D to take me on this hike. AWESOME pictures.