When I was taking my daughter to dance classes and going to her recitals I had no idea where it would lead. Her first recital she did not want to go on stage - she was scared stiff. I watched with the sure expectation she would take one look at the crowd and come running back into the wings, tears streaming down her face, making sure I knew that I had emotionally traumatized her for life by insisting she do the yearly recital "just once and if it's not your thing, you never have to do it again."

She came running back alright, but she was grinning from ear to ear and saying,

Again Momma! I want to go on again!

That's it baby. You are done for tonight. So you liked being onstage?

Why do I have to wait so long? I want to go NOW. 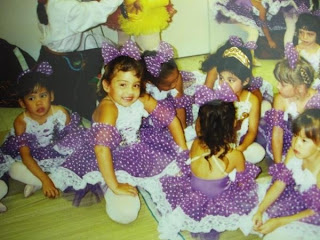 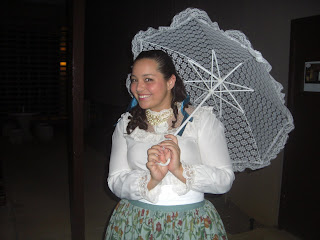 
For her opera workshop class they did a recital. Dad was working. Son was with his friends thankful we did not invite him.
I loved every minute of the workshop, especially when it was my girl's turn to be onstage. Afterwards we were both hungry since we had not eaten dinner. We splurged and went to a restaurant we had both been dying to try. It's somewhat new (OK, opened several years ago, but we rarely go out). The restaurant is known for serving up local ingredients and my daughter and I can go and not spend a fortune as we don't eat like the boys do. We shared an appetizer and an entry, with tea (I had brown rice tea, daughter had chamomile) and thoroughly enjoyed each other's company and the ambiance of the restaurant. It was perfect after a night of opera workshop performance. 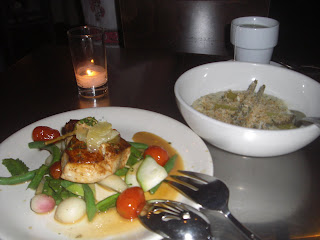 Shutome (swordfish) on the left.
Lemon risotto with cardoon on the right.
Lots of yummy veggies that I did not know.
And now for a little song and dance...

For more Friday Fotos, head on over to Candid Carrie's.

Beautiful! (and you have made me very hungry ...)

Your daughter is lovely ... both then and now! What a wonderful mother/daughter night out ... it sounds like so much fun!

Thank you for sharing her performance ... I really enjoyed it ... she has a great voice!

Enjoy the rest of your weekend!

Loved the before and now. Aren't you glad you had that old picture. Priceless memory.

I love a live theatre performance at any level. Your daughter is beautiful and very talented.

I love the presentation of the food. Yum.

She's adorable, both then and now. And the singing was lovely!

What a great night!

What a gorgeous girl she is an oh-so-talented.
I love Gilbert and Sullivan. :-) Takes me back.

I want to know from whom your gorgeous daughter inherited her lovely voice?!?!

Yum, the dinner looks fantastic and am so glad you had a good girl's night out.

Wonderful post tribute to your daughter and man she can sing. I know you are beaming with Pride... I can see the light from here.

That sounds like the most perfect night ever! I am sure you really enjoyed this time watching your daughter shine and then having this time to share in some good food, just with her. I love moments like this. I am happy for both of you!

PS She is beautiful!

So I'm finding myself a little jealous of your daughter.. yeah, the cool mom thing... and also... the freaking voice!! And how much she loves being onstage... I always liked to sing... but could only perform in a chorus.. not by myself...no effing way....

She's adorable. Looks like a fun show, she obviously had a blast. And what better way to end it than with a good meal. It's hard not to swell up when your kid does something that awesome. Very cool.

Talented and beautiful! Thannks so much for sharing!

I think it is neat that you and your daughter are so close. I just had lunch and a movie with my mother yesterday.

Your daughter is both adorable and beautiful! I love seeing kids get passionate about something and sticking with it.

You've been a good mother to encourage her dreams.

Oh my this is so wonderful. The theater bug bit her HARD! (I know, mine appears to be bit, too)

Here's to many more nights in the footlights...

My eldest performed for years, starting as Gretl in "The Sound of Music," and ending as a high school Madrigal. She no longer performs, but I love sitting next to her in church...she sings for the both of us. Your daughter is so talented...I'm gonna share this post with my kiddo!

She is really good!!! So cute then and now. You must be very proud!!!

Awww. They sound great. College Theater is about the most fun a person can have, and gives you a wide range of highly transferrable skills-truly.

Thanks for stopping by Lyndsay's today!

I'm not sure how I feel about swordfish, but your daughter did an AWESOME job with the recital. Congrats to her for doing such a great job!

They grow up so fast, don't they? Hi from the SITStahood.

A budding opera star huh? I can't wait until Phoebe and I can share more moments like this one.

Tell her I said "Bravo! Encore!"

thank you for the honor. I love to make people laugh. I say this all the time b/c it is so true.

We have lived such similar lives with our daughters! Dani just finished a run of Into The Woods and she portrayed Little Red Riding Hood (with attitude!)

that sounds like a perfect evening! i look forward to the days when the girl is "grown up" and we can do things like that : ) we do have some one on one time now but usually everything is en familia.

That food looks delicious and that vid is great!

I vote for your blog for the blog awards! Good luck!

What a perfect mother/daughter night! Those little purple tutus were adorable...