The Spin Cycle this week is manners. I was going to do a post on how a lot of teens leave their manners at home when they come to school. I swear we should have hidden cameras and then do an open house where we show the parents what their kids act like at the taxpayers’ expense.

But that topic might be better served in appetizer portions. One transgression at a time.

So I’ll go ahead and zero in the microscope on my own family. Teen boy to be exact. He’s one of those cases where my husband and I are constantly on the front lines of the manners battle field. Usually wondering how and when teen boy turned into such an ass.

Now I know to count my blessings. The boy has good grades, hasn’t given us any major trouble…. BUT, OH. MY. GOD. If the kid could think for one second before he opened that mouth our world would feel like a breezy day in a field of wild flowers. Instead of the jagged rocks of irritation hell.

Your mother cleans the bathrooms.

Don’t be a smartass.

Your mother is a smartass.

The other day he invited two friends over for dinner. Now, according to my daughter, who has been stuck in the car with them all, these two boys are as sassy and as thinks-they-are-funny as our boy. However, at dinner at our house, they were well-mannered and quite capable of interesting and appropriate dinner conversation. When I was asking my son to help them serve themselves he said something rude and sassy to me, thinking he was funny.

I did not want to knock his head off in front of these two kids I barely knew. So instead, I stood there and let my blood pressure sky rocket and my head turn into a purplish cartoon image of itself.

Son, I don’t want to embarrass you in front of your friends, so I would appreciate it if you think before you open your mouth.

To his friends I said

You met his sister, right? So you know they were taught manners, even though Son is not representing the family well right now.

One of his friends turned to me and said,

He seems to save it for you. Our parents all like him and he doesn’t act like this at all around them.

I asked Son later that week, on a day where he was being pleasant and lovely company,

Why or why do you act like such an ass sometimes at home? I miss this you.

To which he replied

Sorry. I like to try my comedy on you guys cause I know you’ll love me even if I piss you off.

The many sides of Son , as seen through before he leaves for prom pictures. 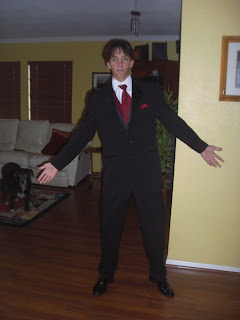 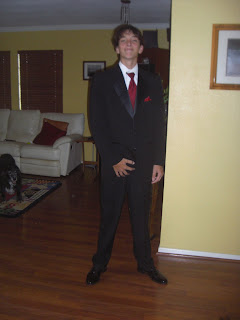 Cracking himself up Son. 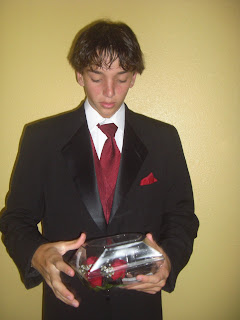 LoL that is great! He is a very nice looking young man... I also like the pooch in the back ground.. like Rudey dog..always there :-)

We can but teach them and turn them loose on the world... lol. Seriously, I think most kids do this kind of thing where they demonstrate the good manners they were taught at other's homes but never or rarely at their own. Must be a teenage kid thing, huh?

Sounds like you cope pretty well really. We can be real asses when we're young and foolish!

Way to give him a safe harbor. He obviously knows he is VERY loved and cherished!!

So, given that your daughter is quite polite, we have some hope for our own girl? Yes? I do remember those times when my own snark came back and bit me when I took it too far, usually at the expense of my loved ones. I have apologized though. Several times. (They like to bring it up from time to time.) Great Spin! You're linked! And I still want student stories!!

There, there. It will be OK! I raised three of them and lived to tell about it. Actually, the 13 year old step daughter that I have now is a bigger challenge. BTW, your son is very handsome. ;)

What a handsome guy! Wasn't it nice to know that other homes he is Mr. Manners? I love that he feels safe enough in his home to try out all his different personalities ... not that they shouldn't be corrected but ... nice that he feels the way he does! :) Good job, Mom!

BTW ... I've featured one of your comments on my blog today. Here's the direct link:

I only have brothers...one who is 19 and I cringe when he opens his mouth. Your boy is very handsome and no doubt will grow into his comedy!

Your son is a hoot. At least he knows how to behave around others. Great prom pictures.

It is very common to ALL teenage boys. Sometimes I want to smack The Young One so hard his teeth rattle in his head. All of his teachers say he's the sweetest, most well-behaved kid they've seen and his friend's parents love him.

We better not introduce him to my younger daughter. Can you imagine the obnoxious grandchildren we'd have if they had kids? LOL

He IS cute though!

Isn't it great when they save their very best for us??

He's so handsome, Pseudo. Awesome photos!Does he know they're posted? Because that seems like excellent payback...

Good luck with your teenage son! I get embarrassed when I have to scold my Jack Russell in front of strangers...lol. Btwn you and me do you find that girls are easier to raise?

He may be an unmannerly pisser, but he's a cute keeper, I think.

Hi! I've missed you! I have two teen boys I'd be glad to share with you.

I don't have kids, but we should definitely swap school stories sometime. I will leave you with this....in my 6th period, I have NINETEEN 15-year-old buys and only six girls. It is a freakin' nightmare.

Please tell me that the mimicing phase really won't last that long. I sense ours starting soon and if it lasts into the teen years, I'm in trouble.

You're not kidding about high school kid's manners. I worked at a high school before Elliot was born and witnessed some terrible behavior. I remember your story about girl referring to how cold it was with the C word... that one still cracks me up.

Your son is adorable and I guess it's a good thing that he's comfortable showing you his goofy side since he's probably trying to impress you. I've read that toddlers throw more tantrums around their parents since they're comfortable with them so maybe it's the same idea?

Oh those darn boys...they can drive us crazy can't they? I think that last sentence from your son says it all..."I know you will love me even if I piss you off." I really don't think they "get it", that when they act like shit heads or says stuff that they really don't mean, that they hurt our hearts. But, I've learned that they really don't mean to hurt our hearts and that it's not personal. Because when all is said and done, the thing they count on is our love for them no matter what. Some day he will get it. Until then, keep taking deep breathes and say, "this too shall pass." And believe me, it does.

Your son is a nice looking young man. I hope he had a great time at his prom.

This is a great post. Surely that sweet boy can't ever, ever give you a moment of angst. Hope he had a great time at the prom.

Be thankful that your son is a house devil and street angel. Imagine how awful if it were the other way around: Mommy's little darling is a real prick when he's in other people's houses, or the school drugs dealer. I'm sure you've had students like that!

I think I have a clone of your son living at my house. It floors me when other parents tell me how nice my boy is. I want to ask if they have me confused with someone else's mother.

Good luck and keep in mind....they grow up and have kids of their own that act just like them. It's justice. LOL

your son cracks me up. to go from that pic in the middle to the bottom one where, to me, he looks a bit vulnerable and young : )

He is adorable. At least in the pics. The smart assiness? Well, he'll either outgrow it or hone it and become rich off of it! Worked for many a stand up, didn't it?

I found this site using [url=http://google.com]google.com[/url] And i want to thank you for your work. You have done really very good site. Great work, great site! Thank you!